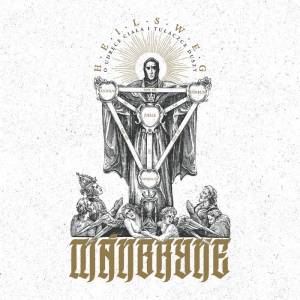 This is the debut album from Polish black metallers Mānbryne.

Featuring members of Blaze of Perdition, Odraza, and Voidhanger, Mānbryne grabbed my attention right out of the gate. On Heilsweg: O Udręce Ciała I Tułaczce Duszy the band offer up 41-minutes of malevolent black metal, and it is very gratefully received.

Heilsweg: O Udręce Ciała I Tułaczce Duszy is truly potent. Delivering highly engaging blackened aggression in collaboration with a layered atmosphere of menace, Mānbryne know exactly what they’re doing with their material, and know how to bend it to their will to maximum effect.

The songs are well-written, easily balancing instant appeal with depth of longevity. On the face of it the music is fast and furious, and while that may be true much of the time, there’s feeling, atmosphere, and nuance here that’s absent from many ostensibly similar albums.

The songs are brutal exemplars of blackened melodic might. This album captures the essence of the second wave as filtered through the lens of the Polish black metal scene. Majestic, dark, atmospheric, and vicious, these five songs capture what can be so compelling and captivating about this style of music.

All of the music has been composed to an advanced level of songwriting and quality control, but the melodies that the band use are particularly effective. Occult leads sparkle and flare, savagely tearing into reality with daemonic persistence and impossible colour. Mānbryne are infernally blessed with a powerful melodic presence, and the songs benefit from this hugely. These melodies sometimes manifest in attention-grabbing ways, with a bright malignant lead that stabs out of the darkness, while at others the guitars adopt a more understated approach.

Mānbryne have created something darkly special here. Heilsweg: O Udręce Ciała I Tułaczce Duszy is an impeccably crafted album, and if you’re a fan of black metal then I urge you to immerse yourself in this as soon as you can.