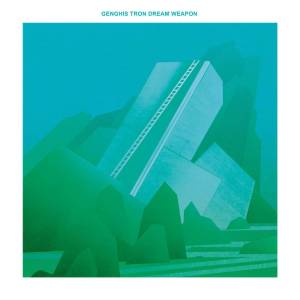 This is the third album from US experimental rock act Genghis Tron.

Thirteen years after their last album, and with a new drummer, (Sumac/Baptists), and singer in tow, the mighty, inimitable Genghis Tron have returned to us. Dream Weapon presents us with 46 minutes of new music, and it might not be what you’re expecting.

This is synth-heavy progressive/experimental/post-rock that fuses together luscious soundscapes and intricate psychedelia, frequently blurring the line between the two and combining them in understated ways.

These songs are layered exemplars of nuanced songwriting and hybrid, multi-styled compositions. Much less aggressive and hostile than much of the band’s previous work, Dream Weapon is the next evolution in Genghis Tron’s progressive existence. They sound like almost a completely different band than they were when they first started. Which they are, of course.

This new album mainly concentrates on crafting ethereal, atmospheric soundscapes that draw the listener in and keep them close. Sometimes quirky, sometimes moving, the band’s psychedelic explorations are light, colourful, and hypnotic. Taking a less-direct, slow-burning route to their songs, each track seems to grow out of itself further over time, only truly revealing itself to the dedicated. This is a risky approach due to attention spans being what they are, but if this is the sort of music that speaks to you, then it’s an approach that pays off handsomely for the connoisseur.

There are essentially no screams this time round. Instead, the new singer has a largely soft, dreamy voice that seems to float above the music like a rainbow of emotion. The vocals are used as another instrument; yet another layer of depth to add to Genghis Tron’s expansive palette.

Fans of the older, more abrasive Genghis Tron material may be disappointed if they expect a rehashing of past glories or retreading of old ground, but people open to the band’s new direction will find much to admire and enjoy here. And if you’re new to the band? Well, just sit back and let the band’s expressive music wash over you. Dream Weapon is an immersive, engaging listen, from a band that have never been afraid to develop and update themselves.