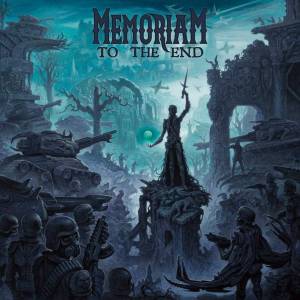 This is the fourth album from UK death metal band Memoriam.

If you’ve been paying attention to Memoriam’s output so far, (including 2018’s The Silent Vigil and 2019’s Requiem for Mankind), you’ll know that the band are a highly experienced classic death metal war machine, reliably pumping out song-based assaults that maim and crush.

On To the End Memoriam offer up a decent mix of slow and mid-paced death metal – with some faster moments too – and is probably one of the band’s most diverse albums to date, (relatively speaking, within the obvious framework of their style). This is a classic, old-school album that’s been written with catchiness and longevity in mind. Lofty aims these days, but successfully achieved nonetheless. To the End is very well-received, and a pleasure to listen to.

As inexorable and relentless as a battle tank – and just as heavy – these songs roll forward destroying all in their path. Their armaments include catchy riffs, infectious melodies, and plenty of hooks.  The interplay between the massive rhythm guitars, the epic leads, and the iconic vocals is powerfully-wrought, making for music that’s greater than the sum of its parts. Each song is full of memorable moments that stick in the brain like a bayonet. There are also a few creative flourishes here and there which demonstrate a band comfortable in their own skins. These are only small additions to the tracks, usually in the form of a particular riff or melody, but they add value to the music for sure.

Yep, Memoriam know how to write a solid death metal tune, and To the End is packed with them. At this point the band could write songs like this in their sleep, but that still doesn’t account for how damn good this album is. If you’re a fan of the mighty Bolt Thrower then you can’t go wrong with Memoriam. To the End is another top quality album from a band that don’t simply scratch my itch for old-school death metal, they obliterate it.