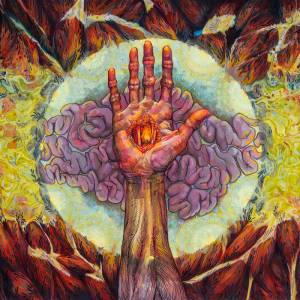 This is the fourth album from Pyrrhon, an extreme metal band from the US.

Over the years Pyrrhon have built up a very well-respected discography, including 2014’s The Mother of Virtues and 2017’s What Passes for Survival. Now, on Abscess Time, the the band have returned with 57 minutes of music to challenge and terrify.

Pyrrhon play non-standard/experimental/avant-garde/post-/whatever death metal. Theirs is a fantastically individual take on extremity, and while it’s resolutely not for the casual listener, connoisseurs of extreme metal will find in Abscess Time a feast of exploratory flavours and textures to savour. Whether this is a better album than its immense predecessor is hard to say, but it’s probably my favourite of theirs overall. It’s that strong.

This is music that’s indicate and complex, but with a raw vitality that belies its technical nature. It’s sophisticated, yet base at its foundations, reveling in its ability to shapeshift and mutate as it develops and unfolds. The music almost feels alive, adapting to the creative whims of its controlling minds as they probe the outer reaches of what extreme metal is capable of.

It’s harsh and unfriendly, with angular, jagged ingredients that taste good as they shred your throat. The songs work their way through the playing time with a malevolent pulse and a malignant air. Atmospheric in places, cold and unfeeling in others, Abscess Time is many things, all of them shockingly, unflinchingly powerful.

As unconventional as Pyrrhon are, they’re so very good at what they do that you can almost ignore the rising sense of dread and existential fear that they cause to well up in you. Creatively chaotic and disorientingly unwholesome, this is an album of terror and darkness of a uniquely human nature, despite how inhuman it can actually sound.

Abscess Time is punishing and intense. It’s wrapped in a near-impenetrable cloak of dissonance, and covered in a miasma of urban darkness that’s almost tangible enough to touch. It’s not something to casually listen to, and it’s not something that lends itself to words like enjoyment or fun. However, even with all of that taken into account, if you’re a hardened extreme metal fan, then it’s utterly essential that you listen to this album, experience its horrors, and get to know every twisted, multifaceted aspect of it. It’s will worth your time to do so.