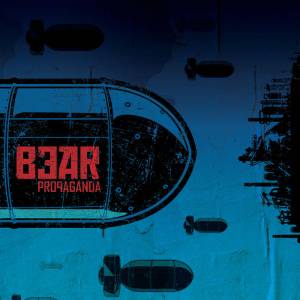 Bear are a progressive metal band from Belgium and this is their fourth album.

I really, really enjoyed 2017’s ///, and it grew on me over time more and more. Well, I haven’t had years to absorb the true nature of Propaganda yet, but damn does it seem just as good, if not better than ///.

Bear’s music is a modern form of progressive metal/post-hardcore, that nonetheless merges 90s hardcore influences into its contemporary blend of styles. Yep, there’s a lot of things going on in Bear’s songs, yet they still manage to keep a cohesive grip on everything. Technicality smashes heads with blunt brutality. Dissonant, off-kilter riffs run shoulders with infectiously moreish melodies. Technical and progressive metal, mathcore, Meshuggah-esque djent, and noise rock all work amiably together to produce material that’s greater than the sum of its parts. This mix of styles and ideas comes together perfectly across the album. Every song has something of its own to offer, while also being a self-contained powerhouse in its own right.

Propaganda is pissed off and full of rage, but never loses control; the songs are carefully curated, channelling anger into productive energy that’s really satisfying and enjoyable to experience. One of the things that sets Bear apart from many of their contemporaries, however, is that their aggression also has heart; there’s a real emotive core to what Bear do. Sometimes this is buried beneath layers of crushing distortion and pounding heaviness, while at others it’s laid bare for all to see. Either way, it’s highly compelling.

Dark, complex, heavy, and angry; Bear’s fourth album seems just as powerful and enjoyable as their last one, maybe even more so. Essential listening for any fan of intricate heaviness.

One thought on “Bear – Propaganda (Review)”