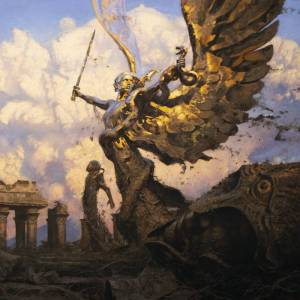 Beastwars are a sludge/stoner metal band from New Zealand and this is their fourth album.

The return of Beastwars is to be celebrated, and what better way than to embrace 38 minutes of new, riff-worshipping, hard rocking metal tunes?

Yes, Beastwars worship The Riff, and IV is full of them. I should also note, however, that the band don’t just throw a bunch of riffs together and hope that they gel; Beastwars know how to write a good song. The album is stacked with catchy structures, memorable hooks, and vocals that seem to have even more power than normal.

It’s also beastly heavy. The album concentrates on the heavier, slower, darker side of the band’s sound, which given the subject matter and themes of the music, (the singer’s battle with cancer), should come as no surprise, I suppose.

The latest Beastwars album is a compelling and engaging one from the very start. Beastwars are a band that I already rate very highly, but IV is probably my favourite record of theirs so far. Here’s to the band, and the hope that they will all be around for many, many years to come.

One thought on “Beastwars – IV (Review)”