The latest release by Hamferð is the short EP Ódn. It only contains two tracks, but is a release that’s not only very enjoyable, but very intriguing too. Both songs are very individual and have an interesting story behind them, which we’ll find out more about below.

Theodor Kapnas, guitarist in Hamferð, was nice enough to talk about both songs, as well as Hamferð in general…

When we started out as a band 10 years ago we set out to create a Faroese doom metal band. At that time we were quite heavily inspired by bands such as My Dying Bride, Swallow the Sun and Katatonia to name just a few. However, since then we’ve tried to create our own thing, and one of the things which I think has made that possible is that the six of us have very different musical influences. I personally listen to all sorts of different stuff, from death metal to classical music to hip hop, and the other guys listen to all sorts of different stuff. So I guess it’s the mixture of all those different musical influences that has made us make the music we do.

Being from The Faroe Islands we are also quite heavily influenced by our natural surroundings and history. It’s a very inspiring place to live, but it is a very small society and it has historically been a very rough place to live. I feel those things also strongly influence the way we perceive music and art in general.

I’ve been listening a lot to the latest albums by Svart Crown from France and Zhrine from Iceland lately. Both albums have a really cool atmosphere going with lots of energy and dissonance in a really beautiful way, absolutely incredible albums. I’ve also been digging the first two Slipknot albums lately, especially the first self-titled one. It has an edge and energy to it which very few records have, which is what metal should be about if you ask me. Those guys were seriously angry back then.

Apart from that I’ve been listening to all sorts of different recordings of Rachmaninov’s Third Piano Concerto. It’s quite fascinating to hear how different a piece of music can sound when it is performed and recorded by different people. The second movement is a personal favourite. And then I’ve been quite fascinated by the last 3-4 albums by Kendrick Lamar. He has been getting a crazy amount of hype over the last couple of years, but he deserves it, his albums are art on a high level.

The story of Hamferð started when our other guitarist John decided that he wanted to start a doom metal band. So he called a few of the guys and put together the first ever Hamferð lineup. They then ended up writing a single song to be able to participate in a Global Battle of the Bands competition – that song was “Ódn”. A brief description of the song’s storyline would be that it’s about a sailor who sets out to sea, his ship sinks and he ends up drowning – pretty classic. The song is divided into three sections, the first section is about setting out to sea, then there is a “faster” section which depicts the storm that engulfs his ship, and then the last section is the finale where the protagonist lies in the water and takes his final breaths.

We’ve played “Ódn” live ever since we wrote it, people have always reacted well and it has been a favourite of ours to play. But it has never felt as a good fit for one of our records. We’ve tried making studio recordings of it once or twice, but we never ended up finishing it as the live energy and the lack of a click track is something which is absolutely crucial to the song. But when we did the release show for our latest record “Támsins likam” last year we had the show filmed and multitracked, and we were so happy with the recording of “Ódn” that we decided we should finally release it.

The second song on the EP is an acoustic version of the track “Deyðir varðar” off our 2013 album “Evst”. We’ve always been quite fascinated with performing in unusual locations. As an example we’ve played a few concerts in a large seacave called Klæmintsgjógv here in The Faroe Islands. But those kind of performances aren’t possible with a full six-piece band, roaring guitar amps etc… For that reason we’ve made alternative arrangements for a few of the songs to be able to pull them off with a smaller setup which gives us the opportunity to play our music in more secluded places.

This rendition of “Deyðir varðar” was actually recorded on top of a mountain during the full solar eclipse that was visible in The Faroe Islands in 2015. We started the performance when it was light, everything turned dark during the middle of the song and then the sun came out again for the end of it. There is a video of it on youtube, and it really gives the song another dimension. And since that video ended up being quite popular we felt it made perfect sense to put it on the other side of the vinyl EP.

Tell us about the gestation for the EP and the reasons behind releasing it now – I understand it’s related to your 10 year anniversary?

2019 is our 10 year anniversary as a band, so it is the perfect time to finally release the track that started it all, which is also the track which the EP is named after. It’s something we have wanted to do for a long time, and since we finally got a recording of it which we are happy with it felt like the right timing to release it. In addition to that it was also about time that we released the solar eclipse recording of “Deyðir varðar” on more platforms than just YouTube. So I guess everything just fell into place really nicely.

How would you describe the relationship between these older songs on the EP and your last album, 2018’s Támsins Likam? Did they help inform the album, and where will you take your sound in the future?

If you take a listen through our back catalogue I think it’s quite clear to hear how our sound has evolved throughout the years. When we started out we hadn’t written music together before, and doom was a new genre for all of us. But I think we’ve developed more and more of a sound throughout the years which I feel is quite evident on “Támsins likam”. So I guess you could say that everything we’ve released has been built on the foundations of our older stuff, but we always try to move it forward.

Hamferð is not a band where we plan on releasing the same record twice, so we’re working on ways to push our musical expression for the next record. I’d be lying if I said I knew exactly where it is going, but I think it will be a further development of the Hamferð sound, whatever that might mean.

How did you choose the cover artwork? How important is good album art to you, and what does this piece mean?

Good album art is very important, especially for a conceptual band such as Hamferð. We strive to create an atmosphere, not just with our music but with all the other aspects around the band such as visuals, lyrics and of course artwork. The cover for “Ódn” was designed by Costin Chioreanu who also did the cover artwork for “Támsins likam”. We got in contact with him a few years ago before we released “Támsins likam”, and he has really understood the aesthetic that we seek to portray as a band. I’m personally of the opinion that musicians don’t necessarily make good visual artists – I know I don’t! So we’re really happy to have a guy like Costin onboard who understands what we are trying to do and can add a dimension to that with the art that he creates around the music. 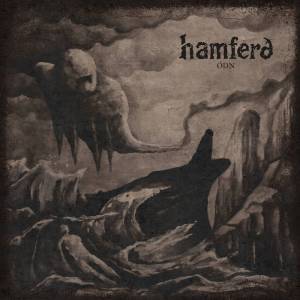 What are the next steps for Hamferð, and what does the rest of the year hold in store for you?

Next up for us is that we have some festivals and hopefully some touring coming up throughout the rest of 2019. Apart from that we’re working on new music and trying out some different ideas for what will eventually become the upcoming Hamferð album.

Thanks for doing this interview with us! And if you haven’t already go check out our new EP “Ódn” which was released on Metal Blade Records earlier this spring. Video recordings of both tracks on the EP can be found on youtube since both songs are live performances and I’d recommend checking those out to add another dimension to the recordings.