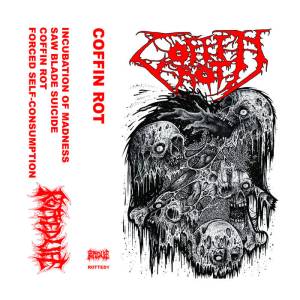 Coffin Rot are a US death metal band and this is their latest demo.

Coffin Rot play gnarly, ugly old-school death metal, and they do it extremely well. With four tracks across 18 minutes, this is morbid music that’s easy to take a shine too.

As soon as the play button is pressed the music immediately wins points with me by the way that the first track Incubation of Madness shambles out of its tomb with a lumbering, doomy gait. Very nice. When it speeds up it shows that the band are just as capable of a ghoulishly endearing delivery when playing fast, too. Then the vocals kick in, and I’m well and truly sold.

The songs are well-written and betray an obvious love and understanding of the style. Thick riffs are enhanced by the occasional macabre melody, and the cavernous growls are guttural and seemingly bottomless. Memorable and defintely moreish, this is a release that contains such abundant rotten promise I can’t wait to see what putrid fruits that the band will birth in the future.

This demo has a sickly warmth to its sound that’s extremely gruesomely tasty. All of the instruments seem to drip with blood, while still having a certain clarity, and I particularly like that the bass guitar’s contribution can be heard and felt.

Coffin Rot are authentic adherents of the atavistic metal of death, and this demo is a really, really enjoyable listen for anyone into this kind of thing. Make this one a priority listen.

Very definitely ones to watch.