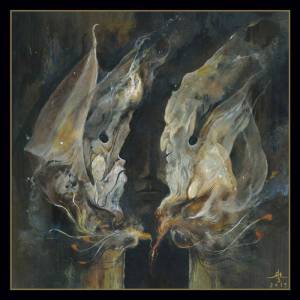 Vassafor are a black metal band from New Zealand and this is their second album.

Now this is a nasty, otherworldly offering. With immense songs and monstrous presence, this is individualistic black metal that liberally pilfers from the darkest recesses of death metal to produce a harrowing, ugly album of darkness and bleak, blackened soundscapes.

Although black metal forms the main framework of the material on Malediction, there are also plenty of death and doom metal riffs and other influences to be found across its 56 minute playing time. This is an album that doesn’t restrict itself as to where it gets its inspiration, using the most evil and nefarious tools available to it, regardless of where they originated from.

Fostering an oppressive and nihilistic atmosphere that conjures up images of dying galaxies and the endless expanse of the empty vacuum of space, this is music that seems to be powered by the channelled strength of waning stars as they spend cold aeons expelling their last energy into the uncaring void.

There’s a claustrophobic intensity on Malediction that doesn’t want to let the listener be free. Swirling and weaving into your mind like something sentient and malevolent, the music on this release claws into your consciousness and burrows deep, refusing to be moved. It’s here to stay, and if you survive its attentions then many dark revelations can be had. Malediction offers experiences that are potentially lethal, but also potentially empowering.

Beware as you approach this album, for once you get locked into its gravity there’s no escape. But then why would you want to? It may be a horrifying nightmare landscape that the band exist in, but as you’re the only one around for light years, it’s a terrorscape that’s all for you.

Get lost in Malediction and become one with Vassafor.

One thought on “Vassafor – Malediction (Review)”