Igorrr’s latest album Savage Sinusoid is both incredibly impressive and extremely enjoyable. It’s an album that does its best to defy description, so I urge you to just take the plunge and give it a listen. Preferably multiple listens, as it has a lot to offer.

So without further ado…

Igorrr is always hard to introduce as it’s a project with many elements and many different influences, from baroque to death metal to electronic music to Balkan music. We all are metalheads in the project but Igorrr is not a metal act and it has no clear or known style which would make it easy to label it. Igorrr is a project where I try to reach my musical ideal, it doesn’t correspond to a specific style of music but more to my personal musical tastes. I like Chopin or Bach as much as Cannibal Corpse or Meshuggah, as much as Aphex Twin or Taraf de Haidouks, that makes the whole thing a non mainstream music.

What are your other influences?

The ones I cited above plus much more, from South American classical guitar to black metal and noise.

I could cite many awesome bands like Mayhem or The Black Dahlia Murder, but everybody already knows them, let’s more get into some more underground as awesome bands :
– Secret Chiefs 3
– Gabi Luncă
– Yamandu Costa
– Ruby My Dear
– Bogdan Raczynski

Tell us about Savage Sinusoid

This record took me a bit more than 4 years to make it real. It was a pretty challenging album to make actually.

I wanted to work without any samples while keeping a complete variety of all the styles I love. I also wanted to reach the « live feeling » of this music, which is a very personal vision of it, kind of my ideal personal music.

As there are many musical universes I love, and wanted to include everything on this album, I had to find the perfect instrumentalist per style and per instrument in order to make it as good as I could, I didn’t want to play all the instruments myself as I think a guy spending all his life playing a specific instrument in a specific style would sound a way better than me playing just a bit of each. When I was a teenager I was obsessively searching for a band that mixes all what I love in music and that pushes the boundaries. I didn’t really find any band like that, and with Savage Sinusoid, I made like the album I wanted to listen to back then as a teenager.

With such complex music it would be relatively easy to make heavy use of samples to help realise your vision. As you say; I understand this is something you wanted to avoid though?

Absolutely, I wanted to try to make everything from the beginning on this album, to be able to feel the whole process and to be under control of 100% of all the elements.

Like a chief who would keep full control on his food and grow by himself all the ingredients that he want to use in his cuisine to be sure of the quality. That made the album more difficult and longer to make.

How did the various guests on the album come to get involved with Savage Sinusoid?

I contacted them because they all are incredible instrumentalists and I needed their musical colour.

Working with all those stunning musicians was definitely a great experience. They all have a very different point of view of the music, that made the recordings much more rich and interesting. It also requires a hell of organisation to make everybody come at the studio with their own instrument. I’m thinking now about the harpsichord player Katerina Chrobokova, we had to rent a truck to be able to bring her instrument from Prague to the deep country side of France, to let it rest for some time for it to get the temperature of the room to be able to tune it correctly etc… it has been such a challenging organisation to make everything working well with all those different instruments.

How were the songs written, and what impact did the guests have on the final versions?

The songs are written by myself before the recordings, then when I give the scores or the ideas to the guests, they sometimes adapt in their way to try making sounds better, so it becoming a kind of co-composition. That was the case with Nils Cheville on the guitar introduction of Spaghetti Forever or the track Cheval with Pierre Mussi, I kept their ideas of adaptation as they were making the track sounding better at the end.

It’s always changing, but for now, my best tracks of the album are Houmous, Problème d’émotion and Spaghetti Forever.

For a long time it was Opus Brain, Viande and ieuD.

Hard to explain why, let’s say that what reflects the best of what’s happening in my mind these days.

For now it’s too early to say, I’m always searching to make better than I did before, and I have some ideas of improving it, but I’m still in the shock of Savage Sinusoid, that damn album took me more than 4 years of my life, it will need a bit of time to get over it.

What continues to inspire and motivate you to create the music you create?

All inspire me, all aspects of life, but especially chickens.

In fact, I think I don’t have the choice, my mind always creates music and it doesn’t let me rest so much. If I want or don’t doesn’t really matter, my mind keeps creating music and I have to record it to make it out of me and not becoming insane. 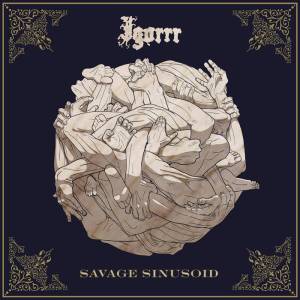 Tell us about the cover artwork

The cover has this flesh ball which represents all the styles united together, like all the instrumentalists from every genres participating on this album. This album is like a big party where all the musics meet together to get extreme, this ball is the symbol of it.

The baroque patterns all around remind the baroque side of the music, showing also the contrast between the raw/brutal ball of flesh with the elegant baroque frames. It has been made by Metastazis.

How do you go about translating your complicated sound into the live environment?

We are 4 on stage reproducing this music live, myself on the machines with all the effects, the pre-recorded instruments that we cannot bring on stage + all the electronics, there are also 2 singers, Laure Le Prunenec, baroque vocalist and Laurent Lunoir, metal vocalist, following by our drummer Sylvain Bouvier, there are basically the 4 main aspects of our music with the 4 of us. It still requires some special equipment and lots of rehearsals to make it real live, but now it’s working very well, the tracks even get more powerful played live.

Do you have any upcoming shows you want to talk about?

Right now we’ve just returned from playing at Hellfest, it was awesome, next festivals will be Dour, Brutal Assault and Motocultor, but mostly we got a big tour this Autumn, we are really exited about it, that’s actually the longest tour we will have ever done! Almost 2 months on the road. I don’t know if there are some dates particularly I want to talk about, but for sure we’re looking forward to that crazy experience.

Do you prefer replicating your music live, or creating it in the studio?

Both are actually necessary, I really liked spending all this time in studio, giving me the possibility to make the exact music I wanted to create, but more than 4 years on an album is too much, we need to play live to share this music now. I guess after the big Autumn touring I’ll need to come back in the studio !

What are the next steps for Igorrr?

Let’s see what’s will happen, but I believe we’re gonna keep touring still for a couple of months. It will depend of how the audience will react to the new album, depending of that, we’ll know what will be next.

Also, I did the sound track of the new Bruno Dumont movie, called « Jeannette », it will be out I guess in September/October.