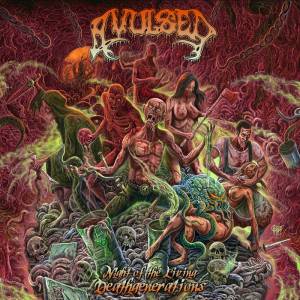 Avulsed are a veteran Spanish death metal band and this is their latest live album.

Boasting 22 tracks, this is a comprehensive and suitably brutal memento of the Avulsed live experience. The album documents their 25th anniversary show; for a band that have been around for so long, they still put on a blinder of a show it seems.

The most important thing in many ways when it comes to live albums is the quality of the sound. No, it’s not everything, but it’s still pretty important.

There’s no real issues with the quality of the recording here. It’s clear and crisp enough to be enjoyable, yet still rough and live enough to be worth listening to over the recorded originals. Also, as the songs are torn from their extensive and lengthy back catalogue, some of which have quite varying production values, they’re presented here in a more uniform way, (much as the recent Deathgenerations album also accomplished – which is the sister recording to this, really).

If you haven’t encountered Avulsed before then this is not the worst way you could be introduced to them. The collection of songs on this release is very strong, which extends to Avulsed’s music in general too. I’d also recommend Ritual Zombi and Altar of Disembowelment for these reasons.

Avulsed are one of my favourite death metal bands – they seem to be able to effortlessly unleash songs that combine catchiness and brutality in exactly the right ways. Night of the Living Deathgenerations captures the raw, primal essence of Avulsed perfectly.

3 thoughts on “Avulsed – Night of the Living Deathgenerations (Review)”