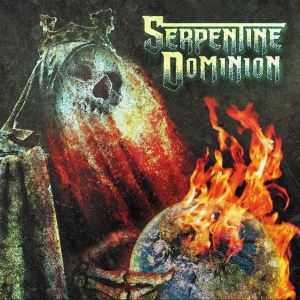 Serpentine Dominion are a US death metal band. This is their debut album.

Featuring current and ex-members of Cannibal Corpse, Killswitch Engage and The Black Dahlia Murder, this was only ever going to be good at the very least.

Well, it’s even better than that.

This, I suppose, is modern melodic death metal. By that I mean it essentially has a death metal base, added to with lots of twisting melodies and topped off with some metalcore influences here and there. It works a treat.

The songs themselves are short and to-the-point. Lasting 27 minutes in total, this is not a release that messes around. Effectively combining elements of the three aforementioned bands in many ways, it’s well-written and obviously comes from a place of passion and love for the music.

The guitarist of Killswitch Engage has always been very good at coming up with decent guitar lines, and Serpentine Dominion showcases this quality quite nicely. Faster and more aggressive than his day job, this is a short and violent record that merges the talents of three different individuals into an album that just knocks the proverbial house down.

Everyone knows and loves the singer of Cannibal Corpse, (or at least they should), and he quite rightly is said to have one of the best growls in the business. As such, you know exactly what you’re getting with his vocals on this album, and you absolutely wouldn’t want it any other way. His voice is on top form, as always. He’s backed up by some occasional other vocals, both harsh and clean, but nothing comes close to his bestial roars.

As for the drumming – this is fast, precise and merciless. Coming from such a talented drummer this was always going to be an impressive listen, and when the blast beats are ripping out it’s all extremely pleasing.

The production is as solid and heavy as you would expect from the pedigree of people involved in this. It doesn’t let the side down and everything sounds great.

A thoroughly enjoyable listen from a supergroup that deserves to be noticed.