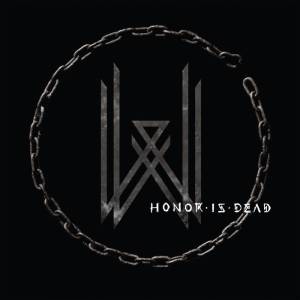 This is the second album from Wovenwar, a US metal band.

Rising from the ashes of As I Lay Dying, this is my first encounter with Wovenwar. Although ostensibly treading similar ground as their parent band, Wovenwar are overall a different, darker and more nuanced beast.

The songs are well-written exemplars of modern metal that have a darker tone than most, and it’s an honest darkness too; this is not something contrived. This is also combined with some pretty anthemic choruses the like of which we’ve come to expect from this type of thing.

There are a lot of quality riffs on this album, with a lot of the songs standing out straight away due to this alone. When combined with the rather infectious guitar melodies, you have music to be reckoned with.

Importantly, a similar thing can be said of the singer. He has a very charismatic voice that manages to convey a lot of emotion and feeling regardless of the style of singing he is using. Whether he’s shouting or screaming, he has a strong presence. His cleaner vocals are probably even better, and he uses his voice with great conviction and power across these tracks. I like that he seems equally at home providing soaring cleans to a huge chorus as he is to singing in a more personalised way in other parts of the songs.

With a singer that could actually overpower a lesser band, it’s a testament to the strength of the music that the rest of Wovenwar can keep up to him and provide an effective and engaging backdrop to his spotlight-stealing performance. Wovenwar have the entire package.

Honor Is Dead has really impressed me. The modern metal genre, (or whatever you want to call it), is prone to being generic and average, and it’s extremely hard for a band to effectively stamp their own identity on it. Wovenwar have managed to do this seemingly with ease. There are enough familiar elements here for them to not sound overly unusual or completely out of place, but they’ve definitely produced a collection of tracks that don’t really sound like anyone else. This is music they have made for themselves in their own style, and luckily for us they’ve shared it with the rest of the world.

Very, very nice. Catchy and memorable, full of anthemic songs and plenty of metal, Honor Is Dead has achieved that rarest of things; something that’s capable of mass-appeal while also sporting it’s own integrity and personality. Impressive.