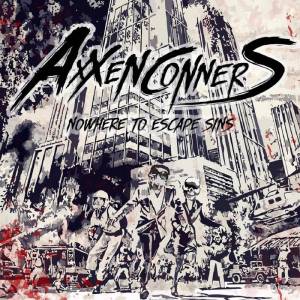 Axxen Conners are a progressive death metal band from Turkey. This is their debut EP.

This short, sub-13 minute EP is an interesting listen. Professionally recorded with a solid sound, the band effectively showcase their metal vision.

The band play a sort of death metal that has a progressive/melodic edge, with elements of black metal stirred into the melting pot for added substance. This isn’t death metal in the standard sense, but nor is their sound straightforward or simple enough to call them just progressive or black metal. I suppose it’s just metal, or extreme metal really; ultimately it doesn’t matter though, as these tracks are good at what they do.

Nowhere to Escape Sins is an intriguing and relatively diverse foray into extreme metal, one that’s surprisingly catchy and memorable. The tracks blur by in toe-tappingly great form, all quality melodies and confidence.

Whether baked into the rhythm guitars, let loose as leads or fully unleashed as solos, the guitars have a progressive sense of melody to them that makes them innately gratifying to listen to.

The keyboards add an enjoyably atypical touch to the songs, bringing in a slightly eccentric air to the metal on offer, one that gives off a distinctly progressive whiff. These keyboards are not omnipresent or overblown and are judged just right for maximum effectiveness.

The vocals switch between harsh shouting grunt-screams and more traditionally blackened screams. The singer has an edge to his voice that’s quite charismatic, and he gives a good performance with a lively personality.

The band manage to fit a lot of stuff into this short EP, and there’s no small amount of creativity and passion on display here. I knew nothing about Axxen Conners before pressing play on this release, but they’ve managed to really impress me. I can’t wait to hear what they do next.