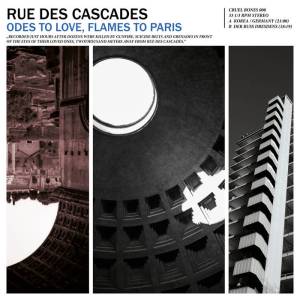 This is the début album from this Swiss post-hardcore/sludge band.

There are only two tracks on this release, but lasting 39 minutes in total there’s more than enough content to keep people happy. Although, as we’ll see, happiness might not be the best term used in conjunction with the music on here.

So what do we have here, then? Rue des Cascades play music that combines ambient/post-rock quietness with louder post-hardcore/sludge sections. This is quite atypically done, though, and isn’t a case of simply juxtaposing clean/distorted or light/heavy sections; instead the band manipulate feelings and emotions, sometimes with heaviness and distortion, and sometimes with space, reflection and a soft, soft touch.

The classic build/release mechanics of any post-whatever genre are fully utilised on this release. From quieter, still sections that foster a lost, despondent atmosphere to the more active, heavier ones, the band take their time to say anything, revelling in the space that they have to forge music that appeals to their own inner ideals.

I like that the band take this time with the music, rather than feeling compelled to rush things at all. The gradually building post-rock atmospheres are lovingly crafted with intimate care, creating moods and feelings that are so tangible you can almost touch them. Occasionally the subtle melodies lurk just below the droning soundscapes, just out of sight, like predators waiting to strike.

I particularly enjoy music that works with tension well. Rue des Cascades build and maintain tense atmospheres effectively, and by the time the damns burst, so to speak, the emotive tension is ramped up to such a degree that the resultant release is necessary and essential.

I was almost expecting this to be an instrumental work, as it has that feeling, but when vocals do first appear, they reveal themselves to be as understated as the music, at least initially. These are plaintive cleans that are buried in the mix; lo-fi and full of concealed intent.

When the heavier parts erupt from the mounting feelings of negativity like an overflowing fountain, harsh screams are unleashed, assaulting the listener with their raw pain. For the most part though, vocals are absent, allowing the music to carry the emotional weight of what has to be said.

Odes to Love, Flames to Paris is a finely realised study in tense atmospheres and emotive catharsis. I highly enjoyed this work, and heartily suggest you check them out if you’re looking for something involving and of substance.