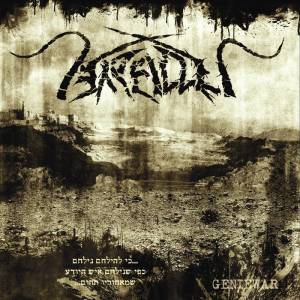 This is the fifth album from this Israeli black metal band.

Ever since I first heard Satanic War in Jerusalem back in 2002, it was immediately apparent that there was something different, something special, about Arallu’s music. Sure, it was black metal and contained recognisably black metal components, but there was also something extra that the band had. They’ve nurtured and developed it over the years, and every time I hear them I’m reminded of just how individual they are.

So basically, we get black metal in the recognisable format, but twisted with Mesopotamian themes and individualistic riffs and melodies. The band take the time to ensure that everything has their own personalities stamped onto it, and nothing sounds like it’s been endlessly recycled by countless other bands.

More than this though, Geniewar features an array of Middle Eastern instruments and melodies that infect the music at a cellular level; this is one of the things that makes Arallu so special. Mixed in with some thrash metal riffs and influences, Geniewar’s blackened assault is both personable and effective.

The songs are an enjoyable melange of the aforementioned elements, all bound by the singer’s performance that brings everything together. Dark screams and throaty roars launch themselves out over the Slayer-esque riffs and blackened blast beats, ensuring that everything fits together seamlessly.

The unusual rhythms, inspired melodies and galloping drum beats provide a stable and interesting base for the band to develop their music. Just one listen to Arallu and it’s easy to see why they have such a good reputation for what they do.

Arallu are once again doing what they do well; as time goes by the band just seem to be refining their art and getting closer and closer to that always elusive ‘perfect sound’ that every band is after.