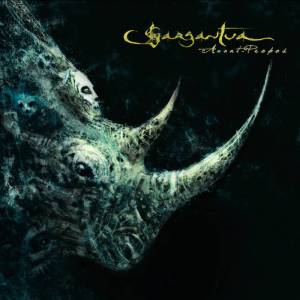 This is the début EP from French Progressive Metal band Gargantua.

Gargantua play Progressive Metal that combines some quite eclectic influences to produce a 26 minute calling card that shows off what they can do quite effectively.

To give you a flavour of their style, imagine a mix of The Meads of Asphodel, Sigh, The Black Dahlia Murder and Akercocke, among others. It’s essentially a form of melodic Death Metal with added folk, avant-garde and progressive influences, allowing the band a freedom to experiment and be playful with their influences.

The keyboard and accordion aspect of their sound is quirky and endearing. While not as completely over-the-top as some of the stuff that Sigh get up to, this part of their sound can still be demanding and attention-seeking.

The more aggressive Metal that lays the foundation of their music is tempered by their other influences so that the majority of the riffs have a lot of other stuff going on; the avant-garde and more-emotive aspects of their style are never too far away.

A very promising first release. While not perfect, it shows a creative band willing and able to push boundaries to achieve the sound they want. With a few tweaks here and there to tighten the songwriting up, they could become quite a fearsome proposition in the future.