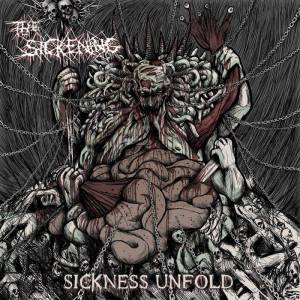 This is the second album from Norwegian Brutal Death Metallers The Sickening.

This is Brutal Death Metal for fans of Deeds of Flesh, Severe Torture, Vile and the like. Indeed, the last song on here is a Vile cover.

Guttural growls lead the way, deep and dark atop the gore-drenched music. The singer is an accomplished grunter and leaves no doubt in your mind that you are firmly in his sights and may very well be on the menu.

The band have a slightly odd production in that everything sounds extremely sharp; whereas the average Death Metal band will happily pummel you to death with blunt objects, The Sickening prefer to use knives and bladed weapons.

The recording allows the band to make ample use of their bassist too, which is something I always enjoy in my Death Metal.

The songs have plenty of chug and groove in them, as well as the requisite blasting barbarity. This is a band that doesn’t understand the word subtle and is quite happy going straight for the kill in every one of these tracks.

When only Brutal Death Metal in its purest of forms will do, The Sickening are here for you.