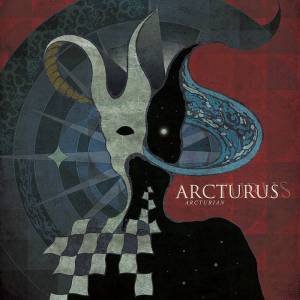 Arcturus are a Norwegian Avant-Garde Progressive Black Metal band and this is their fifth album.

This legendary band finally make a return with their unique and charismatic take on Metal. This is 48 minutes of extravagance, style, class, eccentricity and outright esoteric musicality. The level of skill and talent involved in a release like this is staggering really, when compared with the average band. But then Arcturus have always been outliers.

This album is somewhat of a blend of their earlier and later work. It’s more accessible than the pure theatricality of La Masquerade Infernale, but less cautious than Sideshow Symphonies; the result is an album that takes the right amount of cues from both.

Arcturian is a perfectly judged melting pot of disparate influences that balances them all off against each other in a coherent-yet-varied way. From blast beats to orchestral oddness and everything in between, this is highly-textured and richly evocative music that’s not afraid to pile on the layers of atmosphere and feeling. The songs have depth, dynamics, pacing and personality.

As a focal point, we have the amazing voice of the singer. He has always been one of my favourite vocalists, no matter what band he has been playing in, and on Arcturian he excels in every way. Boasting one of the most distinctive and powerful voices in Metal, he complements the expansive and nuanced music with a strong presence and commanding performance. Hot stuff.

I’m extremely pleased to say that Arcturus’ first offering in a decade is a resounding success, at least with me it is. Music is highly subjective and a lot of people just won’t ‘get’ this, (more fool them), but for those that do, this heralds a wondrous homecoming. Arcturian is a return to form after their last album, (which was good, but lacking that something special that their other work had), and an album to listen to and absorb over and over again.