Neverworld’s debut album Visions of Another World is a talented and energetic display of Metal prowess. I wanted to find out a bit more about them, so I quizzed lead guitarist/vocalist Ben Colton about their impressive début and the universe of Neverworld…

Hello! I’d describe us as an epic/traditional/progressive metal band. We try to take all the best elements of the old school styles and put a fresh twist on it. Come and check us out! 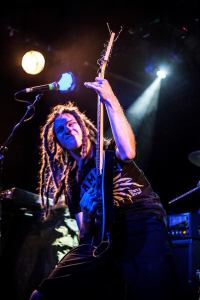 Give us a bit of history to Neverworld

Well we were born in late 2009 forming from the demise of a couple of bands. Basically I was trying to put my old band Sentinel back together but when I couldn’t get everyone on board, those of us that were formed Neverworld. It’s been a busy and brilliant 5 years. We’ve worked very hard behind the scenes and it’s slowly starting to pay off. We’ve been very lucky with gigs, reviews and our fantastic fanbase right from the start. In 2010 we released our début EP ‘Welcome To…’, hit the road for a couple of years and back in March finally released our début full length album ‘Visions Of Another World’!

Tell us about your band name – where did it come from?

Picking a band name in this day and age is incredibly hard! Everything’s been done before so choosing a suitable name was difficult. We wanted a name that reflected our vision. Something with huge scope for song writing ideas and imagery. Right from the off we’ve considered ourselves to be an audio visual band and Neverworld just fitted that perfectly. It’s the place where we all go to when we go to sleep. The dream world if you will, where anything can happen!

Personally I have loads. My taste is generally metal but quite diverse. I just love great well played well written music. I really admire bands who do something different every album but retain their signature sound. Bands like Fates Warning and Winger deserve a special mention for that. I’m also a huge fan of Judas Priest, Iron Maiden, King Diamond, Manowar, Crimson Glory, Redemption, Mr Big, Thin Lizzy, Slaughter, Kings X right through to stuff like Alice In Chains, Dan Reed Network, Blue Oyster Cult etc. It’s a huge list and I could quite easily be here all night! I have a massive CD collection and I’ve probably been influenced by most of it at some point in my life!

I’m about to release an album with my side project All Seeing Eyes so that’s getting a lot of my attention atm! The new Winger and Fates Warning albums are great. I’ve also been listening to Dan Reed Network and The Mob quite a bit but in terms of new bands or music I’ve just been introduced to I’d have to say go and check out my buddies Avenging Benji, Elm Street, Neuronspoiler and Wardrum. Insanely talented musicians and song writers and there’s a fantastic prog band from Italy called Astra. Amazing stuff

As much as possible really. We aren’t silly and we aren’t on a major label. There’s only so much we can do but what’s important is reaction and the reaction has blown us away. We’ve been blessed with great fans and glowing reviews. Something I’m very proud of. Sales wise it’s done quite well too. All in all we are happy with what it’s done. It’s paid for itself and our CV looks a lot better now than it did before its release!

Absolutely. Mainly because of what other people have said about it. I think there comes a point when you’ve heard it too many times and your own judgement becomes clouded. All you can do then is turn it over to the people that matter and cross your fingers which is exactly what we did. It was a very hard and long process making this album so in the end we were happy it was finally done!

What can you tell us about the lyrics and any themes/stories the songs have?

The themes of the album are quite diverse. We have a duet about a vampire and a girl falling in love. Sounds like Twilight right?! Not so, never even seen it. Very much influenced by Let The Right One In and Bram Stoker’s Dracula that one. We have a track about the movie They Live which is one of my favourites, there’s a song all about revenge, one about being haunted by spirits. There’s kinda something for everyone I think on the album. The track This Fire is all about having a desire so strong the flame will never go out. We’ll be experimenting more with themes on the next album and exploring Neverworld a bit more.

Give us a bit of information on the songwriting process

Well a lot of the first album was written a few years back. When we started out we needed 5 songs so we could go out and play live so I sat in my room and wrote some riffs quite quickly, took them to the studio where the others could have a say about it and laid them down. We were just a 4 piece then. Our original keyboard player left before we’d played a single show! So it was quite a straight forward process. Tracks like Ghosts and Eminent Reprisal came about a bit later and had more band involvement. We’ve started writing the second album already and it’s a completely different process now. Everyone’s involved. We are all sitting there in the studio laying stuff down, changing each others ideas slightly and stuff like that. The next album will very much be a complete team effort and I’m loving it. This band has some brilliant musicians and they all have their own influences so it’s going to be interesting to see what we come up with!

How did the duet with Christina Gajny come about?

I’m quite an impulsive fellow. I literally woke up one day and thought wouldn’t it be awesome if we did a male/female duet. I went on my laptop and started looking for a good lady singer. The first one I came across was the amazing Christina Gajny! I thought wow she’s the one. I messaged her but didn’t hear anything back for about a month! I figured she didn’t wanna know! Luckily she did reply and we wrote Blood And Romance. The rest is history! She’s a very talented young lady so I consider her involvement an honour. It was also a masterstroke because of her we had people actually turn up to see us when we started playing in London! Haha! She’s a great girl and if we do ever need a female vocalist again she will be it.

As I said earlier the song writing process is already under way. We are trying to write the ‘perfect’ album. Visions got a lot of great reviews but we have to better it. It’ll be tough but a task we are all up for. As far as music goes I believe in progression. I think that’s a really important part of being a musician. No part of us wants to make the same album again. The next album will have a lot of depth and variety. There will be out and out rockers, a couple of epics and hopefully some more prog style tracks. It’s early days yet but we have 6 ideas on the go at the moment and all are sounding like they could make the album. I’m excited and I think Neverworld fans should be too! Like I said we are on a mission to better Visions and we won’t stop until we have!

What’s next for Neverworld?

We play our final show of the year on September the 20th in our local club. Looking forward to that one. We are playing with Desolation Angels, The Deep and Death Valley Knights. All great bands so should be an epic night. Then we are concentrating on the follow up album. With our début we were recording and playing shows all over at the same time which didn’t really work. The album got delayed massively because of that and we don’t want to do that again. So we plan to hit the studio in a big way and get about 15 tracks done. The best 10 will make the album. We will also be making a video soon for a track off the new album. Really hoping we can get this all recorded this year and then spend next year back on the road. That’s the plan anyway! Wish us luck?!

One thought on “Interview with Neverworld”