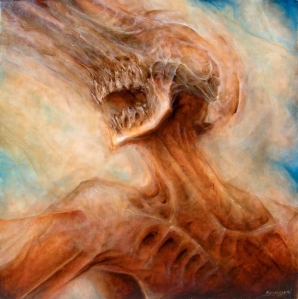 This is the second album from US Death Metal band Horrendous.

Firstly; what an album cover! Top marks for that for a start.

But what of the music? Horrendous play Traditional/Old-School Death Metal with a good bit of the Swedish style chucked in, although they are certainly not limited to this one particular subgenre. Their style is a wider one that encompasses pretty much all of the Classic/Traditional/Old-School Death Metal sounds and delivers them wrapped in entrails as a horrendous, (heh), package of delights for the listener to chew on.

Good riffs and good melodies are apparent from the off; this is band that knows how to rip your face off but also knows how to show restraint and take the slower, more considered route to its slaughter. Some of the guitar leads and solos on this release are sublime, enough to take your breath away. There really are some impressive moments here.

A warm, organic sound means you can almost feel the breathing of the Metal as it clobbers you to death. Even the bass is audible. The guitars have a bit of That Swedish Sound, but not oppressively so. Instead the whole thing has a Classic Death Metal stomp.

The vocalist falls somewhere between an Obituary and a Covenant-era Morbid Angel style. He has a relatively varied voice as he ranges deeper or higher than his core voice as necessary.

The songs chug and churn, flatten and demolish their way through the 44 minutes playing time with the confidence of a killer and the talent of a professional. These are diverse and dynamic songs with strong songwriting clearly stamped all over them in a big, bloody mess.

This is an album that every fan of Death Metal should get their greasy mitts on. Play loud and play repeatedly.