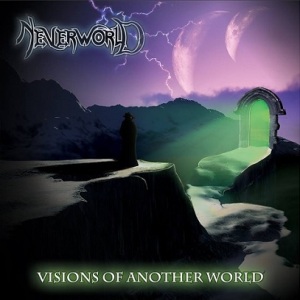 Neverworld are from the UK and this is their début album. They play Power Metal.

Visions of Another World starts with a short, atmospheric intro track before launching into their first song proper which is immediately all double bass, speedy riffs and keyboards/horns. It’s a strong opening that clearly states the intent of the band and the genre they play. Once the vocals kick in it’s cemented and you know it’s going to be a good run.

The band specialise in long songs that make the most of their many talents. The songs are colourful, rich and above all Metal. Soaring guitar melodies and omnipresent keyboards ensure that there’s never a dull moment to be had. There are also more solos than you can shake a stick at and it all sounds goooood.

The band boast a strong vocalist with a grand voice. He carries the tunes effortlessly and provides a focal point to the extravagant and showy music. He delivers a sterling performance.

This is a band that could never be mistaken for anything other than pure fucking Metal. This is epic, grandiose and pure class. The UK is not really known for Power Metal as much as the rest of Europe is, but Neverworld have created a shockingly good album that will surely see them rival the best that other countries have to offer.

If you’re a Power Metal fan you should make it your mission to snap this album up as quickly as you can.

5 thoughts on “Neverworld – Visions of Another World (Review)”