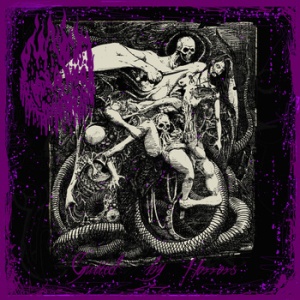 Death Vomit are from Chile and this is their début album. They play Death Metal.

Now that’s what you call a band logo!

This is brutal underground Death Metal played in the Old-School style.

As would be expected from a band named Death Vomit, the music is ugly and unrepentant. It’s filled with malevolent riffing and hateful drums. Savage vocals echo with the afterthought of torture and bloody carnage.

These tracks have a primitive presence; they have an almost atavistic existence as paragons of raw, underground Death Metal as was. Death Vomit play the kind of timeless, Classic Death Metal that no matter what mood you’re in it can’t help but raise a rictus grin to your face.

The songs are strongly written and it’s hard not to enjoy them as they’re so earnestly and honestly played.

If you’re looking for the latest, newest thing then this is not for you; here we have Traditional Death Metal that could honestly have come from almost any era. Suffice to say that it’s good and that’s all that matters.