Skinfather have produced a powerhouse of a Swedish Death Metal album mixed with Crust and Hardcore influences with their début None Will Mourn. Attempting to find out more, questions were posed to the new pack leaders in town…

Tell us all about Skinfather and where you came from

We started playing in 2010. We’ve had some member changes since then, but I think Skinfather as it exists now is the band it was always meant to be.

We built Skinfather on a foundation which takes a lot from the classic Swedish DM scene, but if you listen closely I think you’ll hear other influences. Bolt Thrower, Asphyx, and early Gorefest come to mind. We also come from punk/hardcore backgrounds so that influence finds its way in there as well.

How did you decide on the style of Death Metal that you wanted to play – what appeals about the Swedish Death Metal sound?

We collectively listen to a wide range of music but I think one place where we find a lot of common ground is that style. For me, I love the guitar tone, the emphasis on groove and the pounding d-beat influence.

In my review I note that you have a bit of a Crust/Hardcore influence to your sound as well – would you agree with this?

Definitely. That wasn’t a conscious influence on our part but its there. We have all played in punk/hardcore bands and some of us are heavily involved in that scene, so its just natural for that to come out in the music. We’re not trying to be something that we’re not. 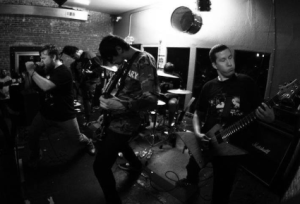 Do you have any goals for your album?

Our goal was just to release a mind numbingly heavy album, which would be something we’d like to listen to ourselves. We’re really proud of this record and I think we achieved that, so anything else that happens from here on out is just a nice bonus.

Is there anything on the album you’re not satisfied with?

Anytime you’re engaged in any kind of creative process, you’re never going to be 100% satisfied. At least that’s how I am. That said, I’ve never been as satisfied with any musical output I’ve ever been a part of as I am with None Will Mourn. We’re very pleased with the result.

Do you want to discuss any of the lyrics on the album and any themes/hidden meanings/etc. that might be there?

I’m going to let our singer Stephen handle that one:

“Most of the songs deal with storytelling that’s meant to display imagery of social issues that surround us. I like to read about history, and thus used it to create what I thought to be intriguing stories with underlying themes of oppression, adversity, corruption, etc. Ordeal by fire, Born of Despair, Hellish Grave, and Impaled are songs written in this manner. Drown in Black, Calloused, and Planes of Ruination are more personal songs that deal with psychological struggles. Dead Still is kind of a lone wolf as far as its theme goes. It’s a slightly fucked up twist off of an old English folk tale from the 12th century that I find fascinating.”

Either Anthonie or myself (guitarists) or Taylor, our drummer, will have an idea for a song. If its Anthonie or myself, we’ll do a rough recording of the song at home with programmed drums and then bring it to the band. Most of None Will Mourn started off this way. We’ll usually learn this “first draft” as a band, jam it a few times and spend time making whatever changes need to be made. This might mean adding parts, fills, or rearranging the song. It has to sound like a Skinfather song, and not a Scott, Anthonie, or Taylor demo.

I think that the process will only become more collaborative. I think that you’ll be able to hear a Skinfather record and think “This sounds like Skinfather” rather than “Wow this sounds just like _________”

What does the future hold for Skinfather?

We’re trying to play as much as our personal lives allow us to. We’ve got a couple festival appearances coming up, and will continue playing local shows. We’ll be making our way up the West Coast very shortly with Nails, Iron Lung and Bone Sickness we’ll be on the East Coast this fall. 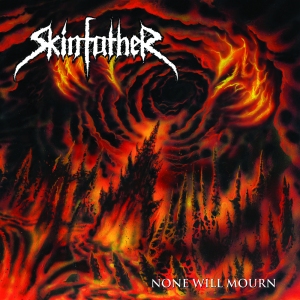 This is the début album from US Death Metal band Skinfather.

They may come from the US but their style of Death Metal is more Swedish than anything else. They are also named after a Dismember song, so you get the idea.

However, they are not just about the hero-worship, they also add some more contemporary influences into their sound – a bit of Entombed here, a bit of Crust/Hardcore there. It all adds up to a riveting listen.

That chainsaw sound is plastered all over every song and this gives proceedings a hefty amount of muscular backbone. The riffs are powerful and the band clearly passionate about their songs, which is obviously a good thing. Also; there are some seriously good riffs on here…

The vocals are halfway between the Death Metal standard and a more Crusty gurning, although when needed the growls do come out in their full bestial glory.

A very satisfying listen. Unlike a lot of bands who try this style Skinfather have managed to stamp their own mark on the Swedish Death Metal template, which is no mean feat.

Listen up – there’s a new pack leader in town.