Darkenhöld are from France and this is their third album.

They play Dark Black Metal with a strong melodic sensibility; this is a band who are comfortable adding a Blackened melodicism to their sound whilst retaining their core of grim fire.

This is Atmospheric Black Metal without being ostentatious or flashy. The band have a firm grasp on this side of things and although the keyboards and enhancements are an integral part of their identity they know how to control them and reign them in for full impact.

Somewhat of a cross between Dimmu Borgir and Naglfar, they join the ranks of some excellent recent Atmospheric Black Metal releases by the likes of Akrotheism, Imperial Conquest, Rauhnåcht, Unfathomed of Abyss, and others, proving that the style is alive, healthy and vibrant.

This style of Black Metal always takes me back to the mid/late 90’s and Castellum is no exception. This is a very enjoyable listen and the songs seem to roll out of the speakers with an easy flow, to be welcomed like old friends that you’re always happy to see.

Give them a listen.

Rauhnåcht have recently released their latest album Urzeitgeist which is a dark treat to listen to. It was a pleasure to ask some questions to this elusive entity. So stick the album on and soak up the atmosphere from the songs while you read the responses below…

Rauhnåcht is an Alpine Black Metal band from Austria and exists since 2010. I am active in the Black Metal scene since 1992 through my other band Golden Dawn. With Rauhnåcht I try to create a pure, nature-based atmosphere with hypnotic song structures and strong focus to the myths of the Alpine region.

Give us a bit of history to Rauhnåcht.

In 2010 I met Max from the Alpine Folk band Sturmpercht. I was fascinated by the atmosphere of their music, so I created the first Rauhnåcht songs on the basis of samples out of Sturmpercht albums. I also went to a cave with some simple traditional instruments and a field recorder to record some basic tracks and background effects that can be heard on many Rauhnåcht songs. I really like the special atmosphere this process brought to the first Rauhnåcht album „Vorweltschweigen“. In 2011 and 2012 we also released an EP called „Waldeinsamkeit“ and a split-EP with Sturmpercht. Rauhnåcht have played two live gigs with session musicians so far.

Basically it’s still the same music that made me start composing songs more than 20 years ago – the pioneers of the second Black Metal wave from Scandinavia, as well as the mighty Bathory. Today I don’t really get inspiration by any current bands, I am rather influenced by the mighty nature of my home country and the emotions I feel when I walk up on the mountains.

I work at my own recording studio and so I have to listen to a lot of music every day. At the moment I master some obscure old Folk records from the 70ies. When I don’t work on studio projects I am almost happy to have silence around me. I recommend all young metal heads to get in touch with the roots of this music, when records didn’t have all the same generic plastic sound as today.
What did you want to achieve with your new album?

I think it is the wrong attitude for an artist to have some kind of „achievement“ as desire when composing music. I want to transform my emotions into music and want to be satisfied with the result, that’s all. Oh yes, and I wanted to write acceptable German poems as lyrics for the first time.

There are always details of the sound and the arrangements that you would like to alter. But there is also a point where you have to lean back and say, ok, it is good as it is. Full satisfaction with my music is never possible for me, otherwise I wouldn’t have any will to continue.

They reflect a pure, traditional, nature-based view on life. I often use myths and descriptions of nature as metaphors for this ideal puristic lifestyle. I want to show the way back – people should think for themselves about all possible aspects of this. 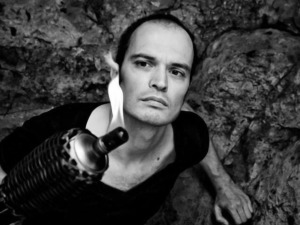 Most of the time I start with a field recording, a sample of a traditional instrument or just the sound of water or wind to evoke a certain atmosphere. When this atmosphere fulfills me, I start to play guitar riffs around that. I record everything I compose immediately, sometimes I even start to mix during the songwriting process. Then I arrange all the rest. Good songs are written quite fast, at least the central ideas of them. When I struggle with the structures or with certain parts, its a sign for me to delete the song idea. That’s not always easy, especially as I am a one man band. For me the most demanding and rewarding aspect of writing music is, that it is creative and structured at the same time.

In my review I state “Rauhnåcht evoke the same feelings of mystical grandeur that bands like Emperor and Gehenna were so good at playing back in the 90′s” – what are your thoughts on this?

The first Emperor album was for sure an inspiration for me when I was young, also early Satyricon, Burzum and of course Bathory. I think I can’t deny these roots and I don’t feel ashamed for them. I think that the era between 1992 and 1997 was the strongest Black Metal era, of course mainly manifested through the Scandinavian bands. When bands like Dimmu Borgir and others became „big“ and the modern production techniques started to get easily accessible, the true spirit within Black Metal music faded.

Some of the subtle instrumentation and effects aid the songs in their formation but only become apparent on closer inspection. Was this a conscious decision?

Of course it was. As I mentioned, I usually start my songwriting with field recordings and effect sounds. Sometimes this is no longer necessary as soon as the rest of the tracks is recorded, but often I just leave that in the background to keep this subtle atmosphere. Think of a forest with its natural undergrowth and thicket.

How do you feel you fit into the Black Metal scene?

Personally I don’t feel any link to the Black Metal scene anymore. The way people create or perceive music has changed during the years, in my opinion there is much less dedication in the scene. Most people regard music as just another hobby in between drinking beer and playing computer games, bands come and go, every nerd can create „bedroom Black Metal“ with a guitar and a computer. So I have enough Black Metal around me through my works as producer and my own music, but don’t feel like belonging to any scene.

I will focus even more on a hypnotic, meditative structure and sound without losing the raw Black Metal energy.

Many walks through hidden paths in the mountains for inspiration. In autumn there will be a split album with Sturmpercht called „Zur Ew’gen Ruh“ on CD and double LP (probably also in a wooden box). Thank you for the opportunity to talk with you and hails to all fans of individual Black Metal music! 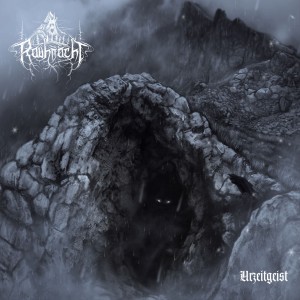 This is Austrian Black Metal played with style and fervour.

Harking back to the glory days of the cream of the second wave of Black Metal, Rauhnåcht evoke the same feelings of mystical grandeur that bands like Emperor and Gehenna were so good at playing back in the 90’s.

The cold Black guitars are accentuated with keyboards that are obvious enough to help steer the songs but subtle enough to not be overwhelming. They provide an intoxicating accompaniment to the other instruments.

The songs charge, stalk, slash or prowl through their playing time, depending on the kind of mood the band are going for. Rauhnåcht seem perfectly willing and capable to excel at either fast or slow sections, usually both and everything in-between during the space of a song. Due to this the shortest song is 5:56, (Urzeitgeist), and the longest is 10:08, (Rauhnachtskind).

Vocals hiss like corrosive steam escaping from a vent, reminding me of the vocalist of Naglfar in their delivery. Subdued cleans also make an appearance at select moments and these are not over-used.

I really enjoyed this album. Along with the recent release from Akrotheism this has made me very happy that there are bands out there still doing this style of non-symphonic atmospheric Black Metal and doing it really, really well.

Treat yourself to this.