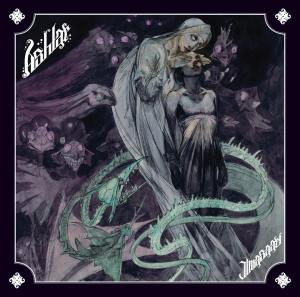 Ashtar are from Switzerland and play Blackened Doom. This is their début album.

Ashtar play music that incorporates elements of Black Metal, Doom and Sludge. I do love a bit of Blackened Doom, and if you’ve been keeping up with the likes of Usnea, Mourning Pyre, Atriarch and Upyr then Ashtar should be your cup of tea too.

Even though the album cover screams Classic Doom, Ashtar’s musical aesthetic is more on the Black Metal side of things. Aspects of Classic Doom do make it into their sound, but these have been Blackened and corrupted into the sickening Sludge mass that they are now.

The vocals are mainly Blackened shrieks that seem to scratch at the back of your eyes like something unclean that wants to come into our world. The singer seems to have a knack for this kind of malevolent rasp, although she does occasionally use her voice in a few other ways throughout these six tracks.

The songs are bleak and sobering glimpses into the mindset of their creators. There are enough riffs and quality guitar lines here to keep anyone satisfied, but Ashtar are primarily about the mood and atmosphere that they create with their chosen medium.

The band are a duo and as such the music is relatively minimalistic, however it rapidly seems to expand to fill a large amount of space with its gloominess and it never seems like you’re listening to anything other than a full band. This is especially true when they incorporate additional sounds and instrumentation into their songs to further deepen the atmosphere.

There’s something extremely satisfying about this release. From the occult feelings to the Blackened bile; from the Doom aura to the impressive riffs; Ashtar have crafted a release that will appeal to the darkness inside.

The début EP from one-man Ukrainian Atmospheric Blackened Doom project Mourning Pyre made an impression with me. It’s very good – go check it out! I was compelled to find out more…

Hello there, I’m Scott! I am the sole creator and writer for Mourning Pyre. Another one of those ‘one-man’ projects… I figured there weren’t enough of them, so I decided to make one myself! Mourning Pyre is a wide conglomerate of genres, but I suppose it can best be described as atmospheric doom / melodic blackened death. Say that three times!

Give us a bit of history to Mourning Pyre

Mourning Pyre actually came about earlier this year because I wanted a more versatile name to write under. I have a vast array of genres that I enjoy listening to, and I found that sometimes I had more “death metal” songs or more “black metal” songs… so I just wanted a name where I could put all that under one roof, so to speak, and not have to try to think of a new band name every time I write a song. It is convenient for me, but extremely difficult when it comes to trying to explain my ‘kind’ of music to others. Often, I’ll simply say I write ‘metal’ music.

My main influence is my life. I fully believe that music is my gift that has helped me get through some really hard times in my life. I don’t want to sit here and say that I’ve had it worse than anybody else, or that my pain is worse than yours, but I can say that without the ability to write music, or at the very least the strong interest in music, that my life would be very different today and I’m not at all sure I could say it’d be better.

My musical upbringing was an eclectic one. My grandparents listened to jazz and classical which was a great addition to the heavy metal influences from my parents. As I grew up, I found death metal and black metal in the mid 90’s when I was on a quest for something new and even more brutal. This is about the time I got onto the Internet and used Napster to really broaden my horizons.

As you can see, I like pretty much something from everything except rap and hip-hop and those offsets as I don’t even consider that stuff to be music. 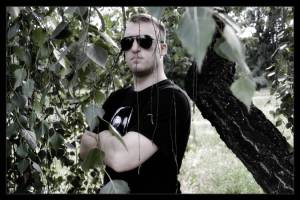 Well, it’s hard for me to recommend certain types of bands or music… so I decided to just type the latest bands I listened to from my Google Play account:

Obviously, I’d have to recommend pretty much anything by Woods of Ypres, though I’m particular to Woods V. Galaktik Cancer Squad, Arx Atrata and Dark Forest might be gems for people out there who want some more atmospheric black metal.

The main goal was to get a professional sounding release. I was lucky in that the guy I was working with was privy to the type of music I was playing and the kind of atmosphere I wanted to get from it. I was very particular about drums and guitars and meticulously recorded the guitars. There are videos about that on the YouTube page. However, ultimately…

This is a tough question. I suppose I could start nit-picking… In terms of a pristine release at studio quality that is listenable? I’d say I achieved that and then some… though I think some of the character of atmospheric music was removed. It’s almost like it is a bit too clean and polished. This is not a knock against the guy I recorded it with, but there are things I wish I could have done differently now that I’ve had time to listen to it about 1,000 times. Overall, the E.P. sounds great and I’m fully proud of how it turned out.

Mourning Pyre isn’t very adept at lyric writing… though I wish I was. I think vocals, singing, and lyric writing is the final frontier that I need to tackle.

Good question! I actually posted a video talking about how I write my songs on my YouTube channel. Basically, I get the idea and inspiration, and then I go to town. In that video, I showed a very old program called Cakewalk Pro Audio 9 from 1999. I actually have forced myself to give that up and now I am writing new music using Reaper 4 directly with Kontakt and soft-synth patches loaded. This allows me to write in dynamics immediately and get a better feel for what the song will sound like. Doing it this way has lent my music a much more cinematic quality.

From there, I’ll either record it in Reaper 4 or in Sonar X3 Studio. I’m a big fan of Cakewalk, actually. I used Pro Tools 10HD for the Mourning Pyre E.P. and I see no particular advantage to using Pro Tools. I mean, if you have $800.00 to blow on over rated software, by all means!

Tell us about the Classical parts/influences.

As it turns out, my Grandparents were on to something when they exposed me to the Classical greats. I’m quite happy they did so. Classical instrumentation helps add the extra layer of dynamics that makes up for my lack of vocals and guitar ability. At this point, I think it’s the last piece to the puzzle of my music – effectively learning how to create the dynamics with strings and orchestral instrumentation… it’s the human quality in metal that gets lost, I think. I should add, also, that the type of instrumentation is more geared towards film score and not so much traditional classical parts… though I wish I had the ability to do that, too!

Some of the songs on this release have a bit of a Post-Metal feel to them on occasion – Holding My Breath (Until I Die), for example, has a guitar part in it that wouldn’t be out of place on a Red Sparowes record. Is the Post-Metal scene an influence at all?

Big fan of Post-Metal! In fact, there used to be a website called Depressive-INC that has since disappeared. It’s a real bummer because there were numerous bands that I had downloaded from there and really enjoyed. I have, unfortunately, lost the MP3 files and, as I said, the website is shut down. Does anybody know of a replacement?

The thing with post black metal that is interesting for me are the use of the tremolo picked chords. I’m fascinated by the types of chords they come up with. I’m more into the melodic aspect of it, obviously. I like the new release from Deafheaven, ‘White Tomb’ from Altar of Plagues, ‘Tenant’ by Ludicra is pretty good as well. The thing also with this type of music is that I need to be in the mood for something that I can just turn on and fly away with. I like it when a melody takes me away.

I’m always trying to grow and expand. 2014 hasn’t seen many new songs… in fact; I can say that 2014 has been my least productive year in terms of writing new music since I started writing music 15 years ago. That’s okay, though. I have a ton of ideas and directions to go. The song I’m currently working on has a very cinematic feel in the beginning. I’m also trying new writing techniques (such as writing riffs or leads ‘on the spot’). I used to write songs very quickly when I would get the idea… now I’m allowing that inspiration to flow, but I don’t force myself to finish the song.

I have always envisioned that 60 minute song… a story of some sort… something that would encompass all of the human emotion. I don’t think I’m quite ready to undertake that task yet, but I feel that someday soon I’ll be mature enough musically to be able to put something like that together.

Thanks a lot for allowing me to do this interview with you. I had to sit down and really ponder some of the questions you asked me. It was a pleasure! 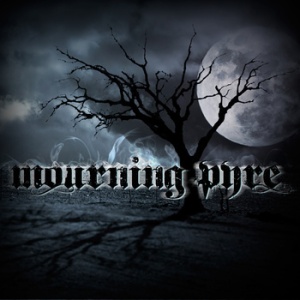 This is the début EP from Mourning Pyre, a one-man Blackened Doom project from the Ukraine.

Emotive leads in the style of My Dying Bride/Paradise Lost are the main drivers of the songs with crunchy rhythm guitars backing them up.

The keyboard/Classical parts of the songs are done especially well and speak of good arrangement and composition. Rather than sounding like addons to the Metal it’s all integrated well into a cohesive whole.

The drumming may be programmed but that doesn’t mean it’s perfunctory or basic; it’s filled with good rhythms and a nice amount of fills. They also don’t sound overtly programmed either as they have a decent sound.

This is Doom Metal rather than straight Doom, and the Blackened influence means that this EP has plenty of up-tempo moments. Some of the melodies used border on Post-Metal as well – Holding My Breath (Until I Die) is a good example of this.

I’ve enjoyed this EP. As début releases go it’s a good one. Here’s to the future and a full album of morbid delights to come.