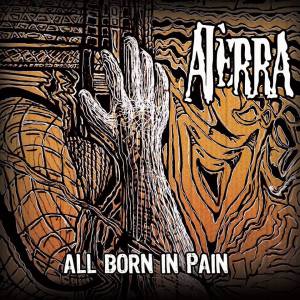 Aterra are from Poland and this is their début album. They play modern Metal.

This album is full of heavy guitars and enough beats to dance to. This is distinctly from the modern school of Metal that fuses Metalcore with elements of Thrash and even Nu-Metal.

This is quite a varied release, with plenty of different styles and flavours touched upon over the 37 minutes of music here. There are frequent small interludes between the main tracks and these take a wide variety of different forms, adding texture as the album unfolds.

How to describe the band…take a bit of Sepultura, (Chaos A.D./Roots-era, vocals and music), a pinch of Korn’s funkiness, some of the Metal stylings of Darkest Hour and Killswitch Engage, the added electronic parts of Rammstein…it’s quite a melting pot of influences that makes me quite nostalgic for this kind of music during the late 90s and early 00s in some ways.

This has the variety and pop-Metal foundation of Nu-Metal, hardened up by Metalcore’s grittier influence. And, unless you’re completely allergic to this kind of thing, it works well. This is helped greatly by the fact that the vocals, (for the most part), are mainly barked out at full volume throughout. Yes, there is the odd spoken-word and clean vocal, but for the most part they’re uncompromisingly un-radio friendly, which is always a bonus.