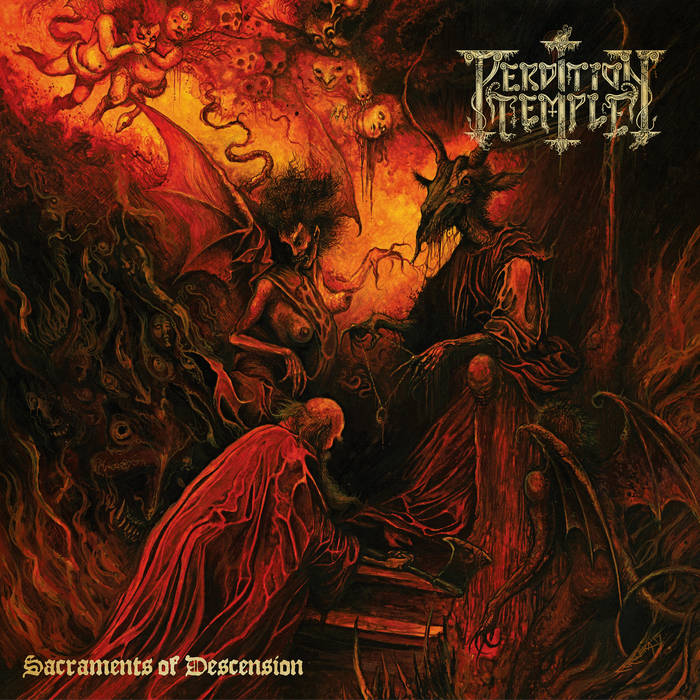 Perdition Temple are a death metal band from the US and this is their third album.

This is malignant death metal with a vicious blackened edge. Featuring current and ex-members of Angelcorpse, Amon, and Malevolent Creation, this is a veteran band that knows what they are doing with death metal. END_OF_DOCUMENT_TOKEN_TO_BE_REPLACED

As many of you will know; Amon started out life in 1987 and eventually morphed into Deicide. Now, a mere 25+ years later, we have their début album!

If you are familiar with Deicide then you know the general style here, but that doesn’t make it any less enjoyable. Among Us is the first track and sets the scene perfectly; muscular, rhythmic Death Metal with a strong sound and some excellent riffs and leads. I wasn’t sure how good this release would be, but this song instantly set my mind to rest. The remaining tracks follow this trend.

It’s clear that the passion and intensity that Eric and Brian Hoffman have for Death Metal is alive and well. This is not diluted or pasteurised in anyway – this is the real deal. What we get is riff/song-focused Metal that is effortless in its delivery and flawless in execution.

Being a very guitar-oriented album there are solos aplenty. Anyone who has been following my reviews for a while now may have noticed that I’m partial to the odd solo, so you can imagine how much I enjoy this.

The recording and general sound of this album is first-rate, as you would expect. The guitar tone is enough to bring me out in fits of excitement alone as it’s just so damn sexy, and the blazing solos on top of it is like listening to liquid gold.

It’s not all about the guitars of course, vital as they are. The drums are blasted out with passion and technique, and the vocalist is, quite frankly, excellent.

With Deicide being such a high-profile band I can imagine Amon causing a split in opinion between those that love the consistency of a familiar sound done extremely well, and between those who were hoping for something different and are disappointed. I am firmly of the former camp and I just can’t stop listening to this.