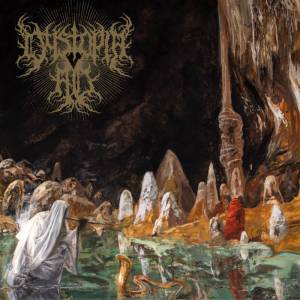 Dystopia A.D. are a death metal band from the US and this is their second album.

This is a very textured strain of death metal, one which is equally at home flying skin with grinding intensity or crafting enthralling atmospheric soundscapes. The songwriting is varied and rewarding, mixing instant appeal with longevity well. The album is also full of creative ideas, which includes various guest instruments and musicians at select points and folk influences.

A range of ingredients have clearly been used in this music, and the band tie everything together well. You can hear everything here from the classic melodic death metal of In Flames and At the Gates, to Death-style progressive touches, to Lamb of God-esque mid-paced heaviness, to the blistering intensity of early Job for a Cowboy, to the contemporary progressive chops of an act like Altars, to touches of avant-garde jazz that you might encounter from someone like Imperial Triumphant, to the worldbuilding of an act like Opeth, and much more besides. It’s all coherent, and it all gels and flows wonderfully. The vocals, (growls, screams, even some cleans), are as varied and well-delivered as everything else here, and overall Dystopia A.D. have put together a very strong package.

I had no real expectations of Doomsday Psalm when I first approached it, (drawn in by the cover initially), but I certainly wasn’t expecting something as accomplished and as impressive as this. If you’re looking for a death metal band with variety, character, and high levels of quality, then look no further than this.