Wonderbox Metal gets sent a lot of new music, (which is great), but there’s no way that everything can get covered unfortunately, (which is not so great). This new column hopes to redress this balance, if only slightly, by taking a look at a handful of releases that a record label has recently sent out that might have otherwise slipped through the cracks.

This edition of this column is split between label Satanath Records and partner label Grimm Distribution. Both have released some fine records over the years, so I thought it as good a time as any to shed some light in their particular corner of the underground.

So my first pick is from the latter end of 2021, but how could I resist its blackened charms? If melodic black metal shot through with elements of death metal is your thing, then you could do a lot worse than pick up this little gem.

The songs are furious and brutal, but this is balanced with melody, nuance, and atmosphere. The band know how to write for the style, and the songs have a variety of creative ideas and melodic hooks to keep you close. It’s a well-written and enjoyable album, and with a duration of only 31 minutes, it’s easy to get to grips with. 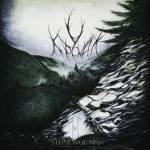 More undiscovered treasure from the tail end of 2021, it seems. Stonewounds contains 49 minutes of atmospheric black/death metal, with the latter bringing an unexpected influence. The band’s striking sound is unusual, melding the black and death metal styles in an atypical way, at least in places. Melodic and atmospheric, yet also brutal and heavy, Stonewounds makes a good impression early on, and builds on it throughout.

The songs are moreish and well-crafted. Although there’s very much an emphasis on atmosphere and the building of rich mood-based soundscapes, I’m also pleased to state that there are some really killer riffs on here too. Ukronakh achieve a good balance between instant gratification and longer-lasting depth of content.

Stonewounds is a worthy and strong release. If this slipped under your radar last year, (it certainly did mine), then take the time to get to know it now.

Also from the latter end of 2021 comes another black/death hybrid in the form of Martydom and its 52 minutes of blackened aggression.

Raw and icy, Veldraveth create foul ugly black metal that’s augmented with death metal power. The music has a chaotic feel to it in places, with dark dissonance and disjointed melodies working together to slice skin and crush skulls. In other places it just punishes with cold and lethal intent.

This is a harsh, unfriendly album. It takes time, but its charms can be revealed under the right circumstances.

Our final end-of-2021 release comes courtesy of Wintaar, with their expressive blackened style. Despite how incredibly prolific this act appears to be, this is a high quality release from Wintaar.

Tear You Down boasts many melodic and atmospheric strengths, and the songs are well-played and delivered. The vocals are absolutely savage, and quite feral in places; these are screams that really cut to the bone. The songs combine charismatic atmosphere with frosted aggression and grim melodies; Tear You Down does exactly what this sort of album should do, and it does it well.

This is well-written music that is extremely enjoyable and satisfying. Check this out.