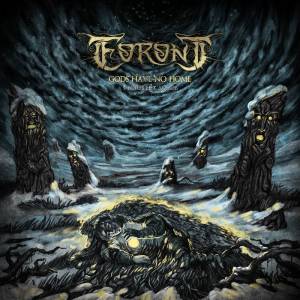 Eoront are a Russian black metal band and this is their third album.

This is the follow up to 2017’s enjoyable Another Realm. Gods Have No Home follows on from its predecessor in a similar way, but is an even superior release. On their newest album Eoront offer us an enjoyable way to spend 50 minutes. Playing a melodically-rich brand of atmospheric black metal, these songs are well-formed examples of the style.

The songs are nicely varied, within the restrictions of their parent style, and the band obviously know what they’re doing with this genre. There’s plenty of texture, paces, and moods explored across the album’s running time, and each of the tracks holds the listener’s attention quite easily. Each of the songs has its own personality within the whole, and there are many standout parts on the album. It’s a memorable release because of this, even on first impression. Multiple spins merely reinforces this, and gradually helps reveal what a strong album Gods Have No Home really is.

Eoront’s sound is full and rich, with epic atmosphere and melodic depth around every corner. Keyboards are used to further craft layers of sound upon the core blackened style, as are other instruments here and there. The music is occasionally enhanced by creative flourishes, which add greatly to the overall package. This might include short acoustic passages, or a section enriched by a violin, or some powerful clean singing. There are many gems like these to be found on this album.

Eoront have retuned with their best work so far. Gods Have No Home is a compelling, immersive, and highly enjoyable album, and I heartily recommend that you spend some time with it.