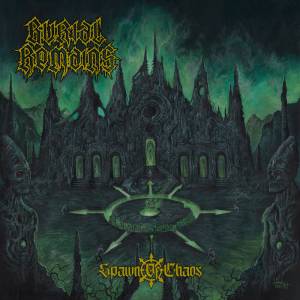 This is the second album from Burial Remains, a death metal band from the Netherlands.

2019’s Trinity of Deception was an enjoyable dose of Swedish-influenced death metal. It was brief, (25 minutes), but made its point well. Burial Remains have now returned with its successor quite quickly, with a new collection of groovy brutality. Theirs is a thoroughly old-school brand of deathliness, and the songs remain faithful to the 90s – a mix of the usual Swedish suspects and Bolt Thrower.

When compared to their debut there are a couple of more songs on Spawn of Chaos, and the average song length is longer, adding up to a beefier duration, (yet still not too long), of 39 minutes. The songs are well-written and I like both the crunch of the guitars and the punch of the drums. The rough growls are pretty darn tasty too.

The overall style hasn’t changed much, except that the music has been filled out with more content; more macabre atmosphere, muscular riffs, and morbid heaviness. The doom-soaked moods and atmospheric elements have been ramped up on Spawn of Chaos, largely accounting for the increase in song lengths, and this seems to suit Burial Remains quite well. These tracks are very moreish, and I find Spawn of Chaos effortless to both enjoy and replay.

Spawn of Chaos is another enjoyable collection of old-school tracks that nonetheless shows a good progression for the band, with the music’s added depth and atmosphere working well for them.

A recommended listen for fans of HM-2 slaughter, (Speaking of, the last track here is a Slaughter cover).