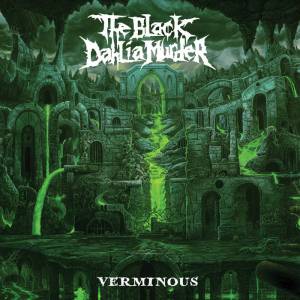 The Black Dahlia Murder are a melodic death metal band from the US and this is their ninth album.

So, one of the world’s premier death metal bands returns, following up 2017’s Nightbringers with 36 minutes of new material.

The Black Dahlia Murder’s fiery brand of aggressive music is on fine form on Verminous. Upbeat and energetic, with high-octane melodic steaks and furious drumming, these songs kick down the door and announce their presence loudly, before burning everything down.

Well-written and full of numerous hooks, the band’s ability to craft good death metal tunes has been established years ago. More than ever this seems like an album designed to be unleashed live, but it doesn’t lack depth or nuance because of this. On this release a few different ideas are buried in the band’s razor-sharp core sound.

Fast aggression is a given of course, but the band also play around with atmosphere and mood more on Verminous. A richer emotive side appears here and there, allowing the band the space to explore darker themes and auras. In practice this means less blast beats than some of the band’s previous work, but this trade off makes for an album that’s more varied and feels more like a journey.

Ultimately if you know The Black Dahlia Murder then you know roughly what to expect here, only this time it’s delivered with a greater emphasis on providing a well-rounded melodic death metal package that’s a bit wider-ranging in its dynamics and pacing. While Verminous undoubtedly contains some of the band’s trademark anthemic writing, it also has an increased depth that’s a great addition to their core style. The end result is one of The Black Dahlia Murder’s most enjoyable and accomplished records yet, and that’s saying something.

Essential listening for any fan of death metal, melodic or otherwise.