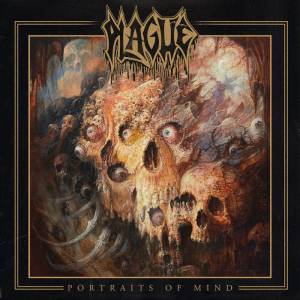 Plague are a Greek death metal band and this is their debut album.

Plague are an old-school death metal band that take influence from the 90s American scene, but do so in such a way that they seem to make it their own. This is ultimately a chunky slab of timeless death metal, shot through with classic influences, as well as some modern ones too. Despite an obvious debt to the mighty Death, the music has its own personality and brutal charm that can’t be denied.

Right from the very first ominous piano note that opens up the album, everything here screams of quality. The various elements in the music – the instruments and their recording, the overall production and feel of the tracks, the bowel-shaking deep growls – have all been perfectly judged and realised by a band that clear have talents in this field.

Each track has a distinct identity of its own, and brings something special to the table. Not only do we get many gruesome riffs and macabre melodies, but we’re also treated to moments of grim atmosphere too. Nuance and subtlety exists occasionally, adding extra depth to the songs. Pick any track here and there’s at least one interesting idea of creative flourish to enjoy, sometimes multiple. Plague seem to know how to create death metal that takes the listener on a journey, through canyons of instantly appealing musical heaviness, and across mountains of ominous moody peaks.

With the quality of the material being as high as it is, Portraits of Mind is an easily absorbed album if you’re a fan of this modern old-school approach, (if you see what I mean). Add to this the fact that the entire thing only lasts 37 minutes, and you have a very infectious album that demands you keep returning to it.

One thought on “Plague – Portraits of Mind (Review)”