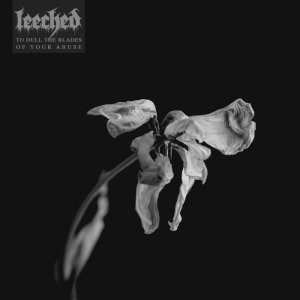 Leeched are a UK hardcore band and this is their second album.

2018’s You Took the Sun When You Left was a violent shot of crushing heaviness and virulent foulness. The band have now returned, with 36 minutes of sonic extremity. And they don’t sound happy.

Leeched’s sound is both expanded and condensed on To Dull the Blades of Your Abuse. The former as they have pushed their sound more, with generally longer songs, bleaker, uglier atmosphere, and more crushing ideas. The latter as they have claustrophobically compressed everything to be the nastiest, heaviest, darkest version of what they have previously produced. Light, carefree music this is not; this is the sound of pain, hatred, and raw anger.

The band’s industrial elements are now fully embedded, sounding more inhuman and cold than ever. This contributes to the music’s unfriendly, imposing exterior, but is only part of the story. Walls of pitch-black guitars and gruff, harsh vocals are also designed to be as menacing as possible. These guitars sometimes crash out of the speakers in huge riffs, while at others seem to simply swell with malevolent distortion until they burst into the airwaves. Frequently though, the guitars are atypical and angular, but very effective. The vocals are the most human aspect of the music, but this should be taken in context, as they’re quite monstrous in their own right.

Leeched’s songwriting has evolved, crafting malignant, aggressive songs that emphasise a careful balance between grinding industrial atmosphere and destructive metallic hardcore muscle. When combined effectively, as is the case here, it makes for the sort of listen that you don’t encounter very often, the sort that’s both familiar and unusual, speaking of a band attempting a path less travelled down into the underground of the crowded musical landscape.

Leeched have managed to take their oppressively heavy music to new heights of grim atmosphere and industrial carnage. To Dull the Blades of Your Abuse is their best work so far, and Leeched sound hungry and coldly vital. This album pulses with malevolence, and demands your attention. Give in to Leeched.