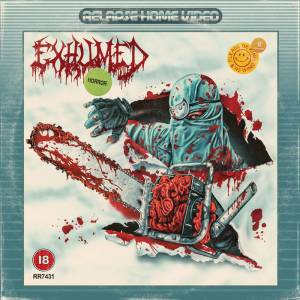 Exhumed are a death metal band from the US and this is their seventh album.

How unexpected. If you’d have told me that in 2019 Exhumed’s newest album would be 26 minutes of gore-obsessed deathgrind, I’d certainly have been surprised. And I am. Maybe this is a reaction to the relative sophistication of their last few albums, (culminating in 2017’s concept-driven Death Revenge), but whatever the reason, the aptly named Horror is a stylistic return to the band’s earlier days in many blood-soaked areas.

Yes, this takes us back to the early deathgrind days of albums like Gore Metal and Slaughtercult, and sometimes even earlier, (there’s two tracks under a minute, one of which is under ten seconds). This is Exhumed stripped to the bone, and it sounds good. The melody and refined aggression of some of the band’s work has been unceremoniously jettisoned, and while we may miss this in places, Horror still plays to all of the band’s base strengths.

Short, harsh, covered in entrails, and reeking of filth, these songs are nasty and brutal. They’re also well-written and surprisingly catchy; given that was one of the reasons for Exhumed’s ascendancy in the first place it’s great to find out that they’re more than capable of this kind of aggressive, raw, atavistic sound in 2019.