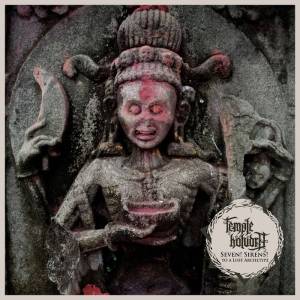 This is the debut album from Temple Koludra, a German black metal band.

The album takes various influences into its melting pot across the album, such as occult black metal rawness, dark death metal brutality, macabre dissonant murkiness, melodic workouts, and atmospheric explorations. It’s all churned together and feeds off itself to produce songs that are recognisably black metal, but also more than just this.

Each track offers the listener something different and has its own personality. The album acts as a journey through mystical, otherworldly territories, where familiar metallic landmarks are obscured by alien melodies and unexpected instrumentation.

As well as raw, visceral power, this is an album of ideas and creativity. The main artist behind this music clearly has a lot to say, and thankfully he says it in compelling, engrossing ways. Seven! Sirens! To a Lost Archetype is the type of album that demands your attention and deserves to be explored repeatedly, over time. There’s a lot here to absorb, but the music’s depth and longevity is apparent even on first listen.

This band, this album, have made a mark.