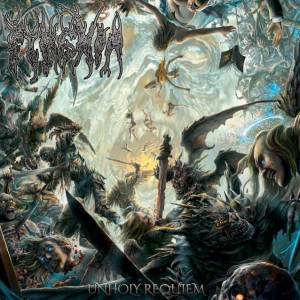 This is the latest album from US death metal band Pyrexia.

2013’s Feast of Iniquity was an enjoyable enough slab of devastation, but one that ultimately, after repeat listens, fell short in many regards. Unholy Requiem, however, blasts and grooves its way into the world with a renewed sense of passion and furore. The Pyrexia of 2018 clearly mean business.

This is a brutal and punishing collection of tracks. Menacingly violent and relentlessly savage, these 25 minutes go by in a blur of blast beats and aggression. The songs, like the album as a whole, are short, but effective.

Suprisingly raw and underground, yet still with professional delivery, Unholy Requiem sounds like it can rip the skin from your flesh at 100 paces. Heavy groove, crushing mid-paced chuggery, (it’s a word…), and blistering blast beats are the main components of the songs, and Pyrexia know how to arrange and structure them well.

Pyrexia have a few new members since their last album, including a singer. The new vocalist has a brutal growl, forceful and savage. He does the job nicely.

Pyrexia seem to have kept themselves quite busy since 2013, and their latest album finds them sounding refreshed, reinvigorated, and hungry for blood.