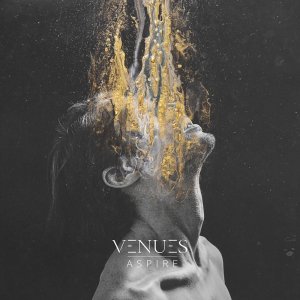 Venues are a post-hardcore/metalcore band from Germany and this is their debut album.

This is an enjoyable 47 minutes of modern heaviness, with a style that fits somewhere between post-hardcore and metalcore.

Coming across as an intriguing and quite pleasing mix of aspects of bands such as Atreyu, Lacuna Coil, Evanescence, Linkin Park, Parkway Drive, and many others, Aspire is greater than the sum of its parts.

Aspire features a dual vocalist approach that consists of female and male vocals, with both singers contributing engaging and well-performed singing. The vocals contain plenty of hooks and catchy choruses, and the opportunity that having two singers presents for overlapping and complementary vocal approaches is not wasted by the band. Both singers display a decent range on the songs, and their delivery, and the accompanying music, is relatively varied across the album.

Although the vocalists are obviously going to be a focal point for a band like this, I’m glad they don’t make the mistake of neglecting the actual music while the capable singers do what they do best. Mixing elements from both metal and hardcore into their personable style, Venues plunder various influences across the album to create an amalgamation of various hardcore/metal bands over the last 15-20 years or so. As mentioned above, this has resulted in songs that are relatively diverse for the style, and most of the songs have their own distinct personalities because of this.

The guitars are nicely crisp and reasonably heavy, which is something that can frequently be lacking in bands of this style. Venues don’t suffer from having an overly plastic recording, (thankfully), and the album sounds surprisingly organic for something as commercially-slanted as this is.

Full of quite luscious melodies and harmonies, the songs are infectious and memorable, spending their time well across the twelve tracks. Leads are used well, and there are some good riffs backing up the singers. I like Venues’ mix of metallic and hardcore influences, and they channel these into good songs that you can easily imagine being belted out in one of your larger local live establishments.

Aspire is a solid album of surprisingly diverse and enjoyable music. It’s probably a little over-long, but this is not a huge issue. Mixing the instant appeal of modern post-hardcore with the increased depth of a more substantial metallic component, Venues have done well with their debut album.

One thought on “Venues – Aspire (Review)”