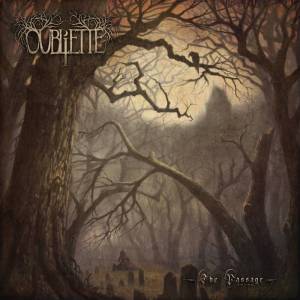 Oubliette are a melodic black metal band from the US and this is their second album.

As well as featuring members of bands such as Enfold Darkness and Inferi, Oubliette also have a member of the always impressive Battle Path in their ranks. Oubliette are a somewhat different proposition than the expansive post-metal of the guitarist’s other band, however.

This is 39 minutes of slick, impressive music. Primarily operating within an old-school melodic framework, (but not exclusively), the band mix elements of both black and death metal into their delivery, resulting in a collection of songs that are well-written and comprehensively structured.

The aforementioned Battle Path member is not the only guitarist in Oubliette – the band boast three of them. As you can imagine, this makes for a layered and expressive interpretation of the style, and there’s a lot of tangled leads, riffs, and solos to get lost in. Although the guitars on this album are certainly one of its selling points, they would be nothing if the surrounding structure, backbone, and songwriting wasn’t up to the challenge of keeping up with them. Thankfully, there are no issues here.

Full of fast, razor-sharp delivery and the type of songs that can’t help but stick with you, lodging in your mind like a psychic splinter, The Passage is very moreish and addictive. Melodically blackened in the most infectiousness of ways, this is vibrant music that recalls the early days of bands like Dissection and In Flames, while also taking some more modern influences into itself here and there.

The singer growls and screams herself through the music with power and presence. Unable to keep up with the intensity of the triple guitar assault, she instead focuses on providing a central point of aggressive delivery as the music tears and gallops around her. It’s a testament to her presence and poise that she exists in balance with the music, rather then being swamped by it or attempting to overpower it. This is yet another facet of The Passage’s delivery that makes for such a well-rounded and accomplished collection of songs.

Rich, multifaceted, and delivered with confidence and poise, The Passage is a well-developed, well-crafted, and hideously enjoyable slice of melodic darkness.

2 thoughts on “Oubliette – The Passage (Review)”