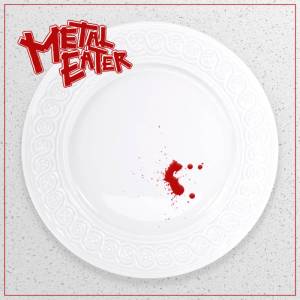 Metal Eater are a grindcore band from the US and this is their latest EP.

I enjoyed Metal Eater’s split with Rope and Knife, so I’m glad that I now get a chance to catch up with them once more.

Old-school crust-fuelled grind is the method of mayhem that Metal Eater use to satisfy their musical vision, and this EP contains 15 minutes of the stuff.

I like Metal Eater. The band have character. Their music is simple, yet effective. There’s a lot to be said for throwing together a few riffs, hammering the drums into oblivion, and then having someone shout and roar over the top of it. It may not be big or clever, but it certainly does the job nicely.

The nine tracks on this release are direct and hit where it hurts. The band mix grind, crust, thrash, and punk together into short chunks of violence that satisfy quite well. I like that there are plenty of meaty riffs to get your teeth into here. Although Metal Eater occasionally dabble in blastbeats, it seems they would mainly rather keep up a generally belligerently fast speed and throw in some mid-paced thrash riffage instead of going all out all, of the time. And who are we to argue? As I say, it does the job nicely, and this EP is relatively varied and brutally delivered.

Well-written, effective, enjoyable. Make sure you check out Metal Eater.