Tralineate’s debut album Ike Antz Leap is an orchestral/progressive death metal album that’s well-written, creative, and obviously crafted as a labour of love. If you haven’t heard it yet, make sure you give it a decent listen.

The man behind the band is named Chris Sanders, and he allowed me to delve behind the scenes of Ike Antz Leap. I just hope I didn’t keep him up…

Give us a bit of background to Tralineate – what are your influences?

Lots of stuff. Mostly metal but I dig some other stuff every now and then. My Dad listened to a lot of 70’s rock like Chicago and things like that which meant that that’s what I listened to also. Haha. He also had an old four album set of the original Star Wars soundtrack that I used to listen to a lot. Such an epic piece of work. That got me into classical and I’ll always appreciate the art of being able to convey so much in a song without a single word being spoken. I started listening to heavier more angry stuff when I was a teenager, like pretty much everybody else. Haha. I latched on to Danzig early on. Always loved the simplicity of them. Just great music all around and really great live performers. Death metal didn’t get my attention until after high school but once it did, that’s where I found the connection. Something about the overall sound that just really grabbed me. All the feelings I had ever had in musical form. I was hooked. And I get a lot of inspiration from life of course, life is nuts. I really like to write songs about the human experience. Because it’s bizarre to me.

Fleshgod of course even though I’m sure most people have heard of them by now. Amazing music. Igorrr is a welcome change to normalcy. I love what he’s doing. Hadal Maw from Australia is doing some great stuff as well. And I’ve been on a bluegrass kick lately. Lots of cool bands incorporating thrash metal styles into bluegrass. It’s pretty great.

What motivated you to create this album?

Just the need within to create again. Some of these songs I did on a previous solo project and I didn’t do a great job with that so I wanted to make it right. I felt it necessary to give those songs proper life. The other 7 songs on the album happened naturally during the time of fixing the old ones.

What’s the name behind the album title and how does the music fit in with this?

Ike Antz Leap is a play on words, actually more of a play on word sounds. It’s read as ‘I can’t sleep’. I have perpetual insomnia and have a lot of craziness rattling around in my head and all of these songs are those random crazy things. Plane crashes, depression, paranoia, death, suicide, etc. It’s all just a collection of the miscellaneous ramblings of a madman so to speak.

How were the songs written? In particular, how did you balance the orchestral/progressive aspects of the music with the more traditional death metal ones?

I spent a lot of time trying to work that out. Most of them started out as random riffs, a couple of ’em were written in just one session. I love it when that happens. You play something and it all fits and feels right and you just knock it out. I wish that happened more often. Anyway, I wanted it to have some dynamics, some ups and downs, not just all blast the whole way through. I might do that in the future but for this one I wanted it to kind of play out like a story. The orchestral parts just don’t fit in all of my songs so I was careful to really hear where they fit and where they didn’t.

Ha. I don’t know. There’s a few that I really like. The title track because that’s literally my life. I can never get normal sleep it seems so that one is my battle cry. Regulators of the Barcoded Flesh is awesome just because of that war part toward the end. I had a lot of fun putting all those little pieces together. I think it turned out really cool. Among the Thorns because of the orchestra parts and the lyrical content. Three Points of Execution because it’s just a rager from beginning to end plus my friend Brent’s solo is just incredible. Monday, May 12th is about the day my Dad died though. That was the hardest day of my life. I owe a lot to him and that song is my favourite because it makes me think of all the great times and not so great times we had together and where I’ve come from.

That’s a scribbled up visual of what I look like most nights. Sitting on the edge of the bed staring into the nothingness and losing my mind because I can’t fall asleep. Simple as that. Sharpie and a piece of yellow legal paper. I think it took me all of an hour to do that. It’s different, maybe even weird, but it fits the overall theme perfectly. 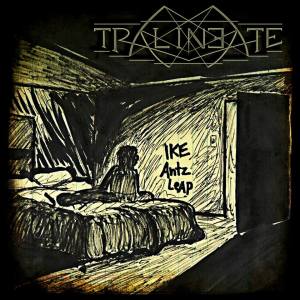 Pretty good really. I had a lot more information available to me this time around so it went way better than the last one. I edited a lot. I’d change something and put it on a disc so I could hear what it sounded like in my car and then either go back and change it again ’til it was right if I didn’t like what I heard or if it worked then continue on. This is an ongoing learning process so I’m still figuring stuff out and have learned a bunch of tricks even since this release that I’ll put to use for the next one.

If you had to do it all over again, would you do anything differently?

Yes definitely, but I’m happy that I got it done and for what I’ve got to work with equipment and budget wise , I’m ecstatic that it turned out so good.

How does Tralineate compare to your past work that you’ve been involved with?

I never had an orchestra parts in previous bands, just guitar, drums, bass, and vocals. My writing style hasn’t changed too much but it’s gotten better, especially lyrically. I really like that I don’t have to compromise for anybody. Haha. I can do whatever weird thing I want.

How do you feel that you fit into the wider death metal scene scene?

I have no idea honestly. Haha. But I’m thrilled to be a part of it again. Time will tell. I don’t think I’m really breaking any new ground here yet but we’ll see. I just hope to be solid enough to be a part of the metal conversation.

What does the future hold for Tralineate?

More music. I’m already working on a second album. And this one might be a little different. Still death metal, but a couple things might be weirder. At least that’s the plan. Haha. I’ve got an idea for kind of a themed album. It’ll be darker. We’ll see if I can pull it off.