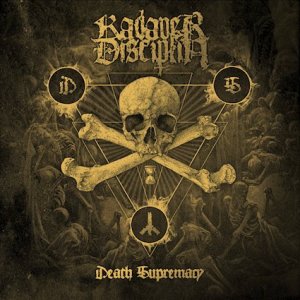 Kadaverdisciplin are a Swedish black metal band and this is their debut album.

Inspired by the second wave Swedish sound of the 90s, Kadaverdisciplin have updated this with a modern delivery for 2017 and then unleashed their virulent blackened plague on the world with a clear enthusiasm for the harm that it causes.

This is 46 minutes of blackened aggression, mixing elements of old and new in the style of hard-hitters such as Marduk and Watain. It should be noted, however, that Kadaverdisciplin very much put their own spin on things and are more interested in forging their own path rather than copying the masters. It should also be noted that the drummer of Marduk also supplies the merciless beats for Kadaverdisciplin.

One of the things I love about this release is the bleak, frozen melodies that are used. These weave inside the rest of the instruments, twisting and mutating as time goes on. The sense of old and new being smashed together is strong on this album, quite hugely so in some places. I seem to be simultaneously reminded of the days when I was first getting into black metal in the early 90s, while also having it firmly reaffirmed what a potent force the style still is in 2017. That Kadaverdisciplin manage to do both, and do both so well, is quite impressive.

The feelings and atmospheres evoked by Kadaverdisciplin’s music are backed up by the strength of the songwriting. This is music that may be straightforward blackened aggression in many ways, but is definitely not without style, substance, or longevity. This music on Death Supremacy has a classic, timeless feel to it; this much is apparent even on the first listen, and on subsequent spins the music proceeds to get under your skin in no uncertain terms. For all its speed and baring of teeth, this is crawling, malevolent black metal in intent and atmosphere, worming its way into your mind and leaving you with the distinct impression that it’s something you’ll still be listening to years from now.

Death Supremacy is as enjoyable and effective a slab of second wave-inspired black metal as you’re likely to meet in 2017. With authentic passion and blood-covered bucketfuls of talent and skill, Kadaverdisciplin have impressed with their debut album that’s for sure.

Highly recommended for all devotees of the dark arts.