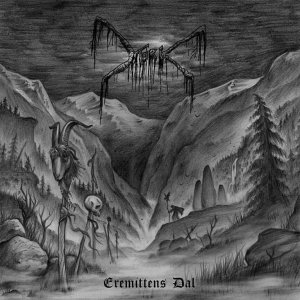 Mork is a one-man Norwegian black metal band and this is his third album.

Here we have 48 minutes of old-school, Darkthrone-influenced black metal. It’s cold, full of icy groove, and immediately hits the spot.

This is music with attitude, establishing a dominant presence early on in the playing time, as well as a talent for frosted riffs and cold, desolate atmosphere.

The rhythm guitars favour deep grooves that you can easily get lost in, although there’s more variety of delivery here than just these. I also like many of the mournful melodies that are peppered throughout the songs, adding extra depth and colour when they appear.

The vocals are particularly well-performed. Covering everything from harsh screams, ritualistic chants, booming shouts, and deep growls, the artist’s voice is well-adapted to its role, and his performance across these tracks is primal and honest.

As well as its more obvious assets, there’s a certain character about this album that gives it a further appeal above that of a lot of similarly-styled releases. This is largely down to the songwriting, of course; although ostensibly similar to many others, there’s an indefinable spark here that’s undeniably compelling.

Raw and authentic, this could easily have been discovered in some long-lost vault from the 90s. The songs are enjoyable exemplars of the style, and Eremittens Dal is a very satisfying blast of frozen air.

A highly recommended listen for anyone into old-school, orthodox black metal.