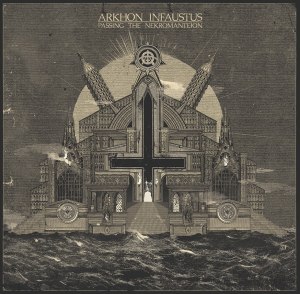 Arkhon Infaustus are a black/death metal band from France and this is their latest EP.

After a decade of nothing, we now witness the rebirth of Arkhon Infaustus. The creature that has come crawling back out of the underworld is a fresh, reinvented version of the older one that so many people held highly, however.

Taking their trademark sound of yesteryear, the band have refined and updated their delivery to include more modern, dissonant, and bleakly melodic influences. These new songs are longer and more involved than their predecessors, frequently taking time to build dark atmosphere and malevolent mood as the band tear through the playing time with obvious relish.

It’s good to have the band back.

I must say I like what I’m hearing on Passing the Nekromanteion. It’s absolutely great to hear the band’s infectious ferocity and witness with awe the devastation they cause. However, the increased levels of atmosphere and nuance in their songs, taking influence from modern strains of black metal, are a grim revelation, and this new material is hideously, terrifyingly enjoyable.

The singer has always had one of my favourite extreme metal voices, especially his monstrous deathgrowls. All I will say about his return to the airwaves is that I’m pleasurably blown away from hearing his colossal roars once more.

So yes; I’m very happy that Arkhon Infaustus have returned, and I’m even happier that they have developed and updated their sound in the way that they have. Passing the Nekromanteion contains almost 34 minutes of new material, and it’s utterly worth listening to again and again and again.