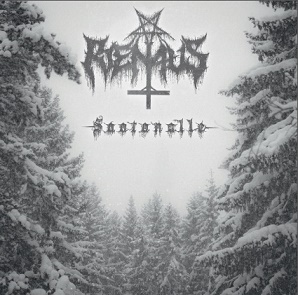 Rienaus are a Finnish black metal band and this is their second album.

This is a band that play authentic second wave black metal and clearly feel it through and through.

Raw and Satanic, Saatanalle effectively channels the spirit of the 90s second wave into the 37 minutes of music on this album, so much so that it’s almost hard to believe that this is a 2017 release, rather than something that came out decades ago.

Cold and frosted, this is a band that know how to write a good mid-paced riff. The grim malevolent groove of some of their material is extremely enticing and full of icy splendour.

There’s a darkly melodic nature to some of the blackened riffs on this release, but this is subtle and buried in the distortion. This is not a band that you’d label melodic black metal, but these melodies are there nonetheless, lurking beneath the sheets of ice that the guitars emulate.

The singer has a scream that’s needle-thin and serrated to its soulless core. It’s the perfect accompaniment to the band’s classic approach to black metal and is just as classic in its delivery in its own right.

Rienaus have produced a thoroughly commendable album full of dark delights and authentic black metal. The songs are very well-written and show a deep understanding of what makes the classic style so enthralling and captivating.