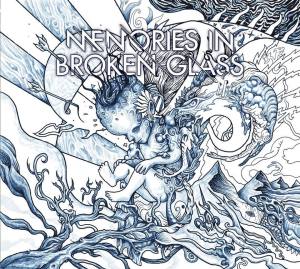 Memories in Broken Glass are a modern metal band from the US. This is their debut album.

This is modern progressive/technical metal with a djent slant that showcases how it’s easily possible to create involving modern music without it coming off as overproduced plastic rubbish.

Combine Coheed & Cambria, Textures, Meshuggah, Tool and Periphery together and you’ll have an idea of the sound that Memories in Broken Glass are going for.

With an atypical fluidity that comes of having a djent aspect to their sound, the songs on Enigma Infinite sound as modern and as sharp as any similarly fashioned band. However, in my opinion Memories in Broken Glass have quite a few advantages over a lot of their more throwaway peers.

One of the interesting things about Memories in Broken Glass is that they manage to avoid some of the sterility that can be an unpleasant side effect of this type of modern djent-influenced metal by having a slightly different production to the norm for this kind of thing. Yes, in some ways it’s as shiny and polished as you would expect, but there’s a welcome gritty edge to the music that you don’t commonly encounter in a band like this. I like it.

As well as the production values though, the songs also stand out. While ostensibly similar in style to those of other bands of this ilk, they have a lot more lurking under the surface than is usually encountered. I find a lot of djent/modern metal to be quite facile, so I was pleased to discover that Enigma Infinite has more depth than most.

The songs combine the beauty and beast aspects of this kind of thing quite well. Heavier parts with harsh screams and shouts rub shoulders with more melodic, emotive sections that feature luscious clean singing. Some of the choruses are particularly inspired. The band mix up this formula enough across the album so that they keep things interesting rather than just repeating the same thing in exactly the same manner for every song.

Electronically enhanced atmospheres provide additional depth to the tracks, and I like the way that the songs have been written with a mixture of progressive complexity and instant gratification. Some of the riffs are very well-realised, as even when they’re playing the more straightforwardly heavy parts the guitars are usually doing something a little different than the standard fare.

Enigma Infinite has impressed me more than I thought it would. Catchy and memorable, with good compositions and more than enough substance to counteract the obvious style that they also have, Memories in Broken Glass have found a willing fan in me.