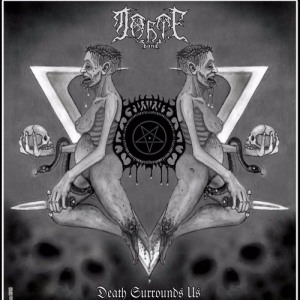 Morte are a blackened death metal band from Poland and this is their debut album.

Boasting a nice solid sound, Morte deliver 37 minutes of metal that combines elements of both death and black metal.

Speed and serpentine riffs easily come to the band it seems, along with slower double-bass led sections and some mid-paced delivery.

The guitars oscillate between chugging, pseudo-thrash death metal riffs and darker, more emotive ones that are infused with black metal’s inherent evil. The two sides of their sound are fused together in such a way that the songs embody both styles at different points in time, with the band selecting the best tools for the job at hand, as it were.

Solos are made good use of, adding some lightning streaks of colour to the performances.

The vocals are kind of halfway between styles too; a bit too guttural to be purely black metal, yet with too much venom and hatred to be born of purely death metal either. The singer knows his trade though and delivers with earnest aggression, acting as an anchor between the band’s genre-hopping between black and death metal.

The songs are straightforward hymns to the black/death metal gods, and they are certainly not without their charms.