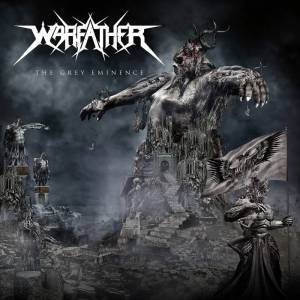 Warfather play death metal and this is their second album.

Warfather’s debut album Orchestrating the Apocalypse was a bit hit and miss. Although it was, overall, an enjoyable affair, over time it revealed itself to be a little unfocused in places and had a rather thin production that didn’t do the music any favours.

Two years later, enter The Grey Eminence. First off, there are no problems with the production this time round. On this latest release it’s thick, chunky and muscular, just as it needs to be. Being produced by Erik Rutan, I would expect no less.

I’m also pleased to say that The Grey Eminence is more focused too. Gone are the small interlude tracks and wandering experimentation. Instead, we get a few less tracks that are longer overall, showing the band adopting a more coherent approach to their art.

This is still not your typical death metal, though. On their first album the band demonstrated that they were more than willing to explore and play with their sound, both in atypical riffs and arrangements, as well as other touches here and there. Whereas on their debut album this came off as overly experimental and tentative in places, on The Grey Eminence it’s paid off and these songs have the right amount of challenge and confidence.

The vocals, (provided by Steve Tucker of Morbid Angel fame), are once again flawlessly performed, but sound much, much better. No longer robbed of some of their primal power by a weak production, on The Grey Eminence they sound as they should; commanding and dominant.

Warfather have produced a very strong album of interesting death metal that’s certainly not your usual fare. Taking their cues from the inventiveness of a band like Morbid Angel, they continue in the vein of their spiritual fathers by attempting to forge a new path through the well-worn death metal landscape. Only time will tell how truly successful they have been, but based on an initial bunch of run-throughs, I’d say that The Grey Eminence is a firm winner.

With a new album that builds on the promise shown on their debut, Warfather’s second album is better in every way. If you’re looking for atypical and interesting death metal that still has kick and bite, then look no further.