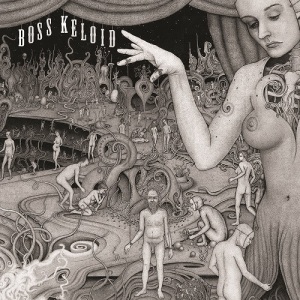 Boss Keloid are a Sludge Metal band from the UK. This is their second album.

With a huge, massive sound, Boss Keloid bring the heaviness with ease. The songs are chock-full of tasty riffs and the kind of guitars that can knock you over if played at full volume.

The Stoner-esque vocals sound really good, adding an extra level of colour and richness to already textured music. The singer has commanding presence, great personality and charisma, all of which are clearly felt through his voice.

The songs themselves are very satisfying, all the more so due to the decent amount of variety and interest that the album has. With almost an hour of music it would be easy to lose momentum or have some dull moments, but the incorporation of the various Metal sub-genres into the mix makes for a very endearing and engaging album.

Unlike some bands that use multiple styles as parts of their musical recipe, Boss Keloid don’t move from one easily identified sub-genre in one section to another; the band mix all of these elements into the songs together, holistically making the most of these influences to the betterment of the songs and the album as a whole.

Each track is recognisable as its own beast with its own identity, and pretty much every track has elements of the wider pool of influences mixed in.

An extremely impressive album. Herb Your Enthusiasm is a keeper.